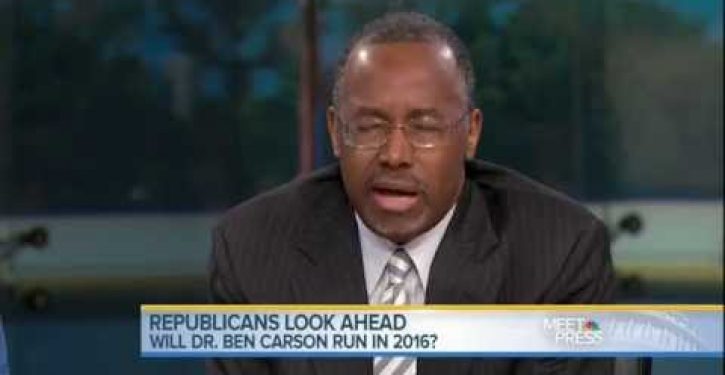 During his appearance on NBC’s “Meet the Press” Sunday, Dr. Ben Carson deftly parried a “gotcha” attack by the show’s host, David Gregory. After playing a clip in which Carson said that Obamacare was “the worst thing that has happened in this nation since slavery,” Gregory hit him up with his question:

People who have health care now that didn’t have it before, I suspect, would disagree strongly with you. But I wonder, in addition, is that really how you want it to be defined, how you wanna put government on trial in effect, in a political way?

Carson began by correcting the host. “Well, first of all, recognize what I said — ‘worst thing since slavery.’ I didn’t say that it was slavery. People who are well-read…” “Well, you said it is ‘slavery in a way,’ because it makes all of us subservient to the government,” Gregory interrupted. Carson once again corrected Gregory and finished him off with a history lesson on the slavery of government control.

Right, and I said, “in a way.” In a way, anything is slavery that robs you of your ability to control your own life, and when you take the most important thing you that you have, which is your health care, and you put that in the hands of government bureaucrats, I think you have done the wrong thing. And, as I was about to say, you go back an look at the neo-Marxist literature and look at what they say, you don’t have to listen to what I say, about taking control of healthcare of the populace and making the people dependent. This is not what America is about. Do I believe in healthcare for everybody? Absolutely! But, I think they’re much better ways to get there which leaves healthcare in the hands of patients and of doctors.

Obamacare costs increase due to wasteful contracts and failed exchanges
Next Post
Cartoon of the Day: Lost in space