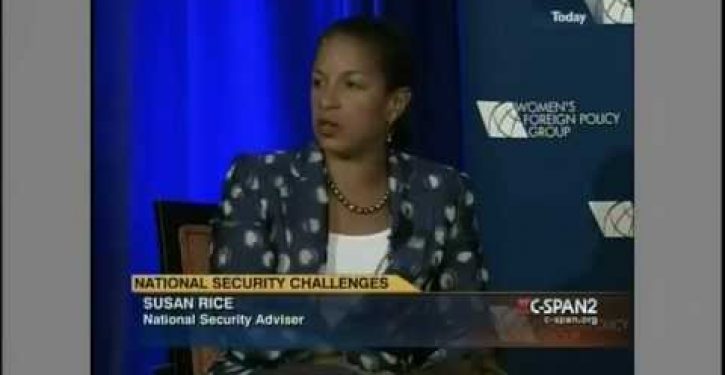 Woodruff was acting as interviewer in a free-ranging discussion covered by C-SPAN.  The subject of Benghazi naturally came up.  When Woodruff asked Rice what else the House select committee might find in its investigation of the Benghazi attack, Rice responded, “Dang if I know.”  General merriment ensued.

Rice went on to suggest that there’s nothing else to learn (transcript from the Foundry):

The administration has produced 25,000 pages of documents or 25,000 individual documents. They supported, participated in, contributed to the investigations of seven, I think, different committees. We have had an accountability review board by a very distinguished group of outsiders.

So it’s interesting that after all that, we still don’t know, among other things, where the president was after 7:30 PM on the evening of the attack, who all the survivors of the attack are and what they think happened, or why Hillary Clinton was never deposed by the accountability review board.

In the same discussion, Rice also lamented that America’s “polarized,” free-ranging politics undermine our standing with the world.  That was a little too much even for Judy Woodruff, who replied that this freedom is the “strength of our democracy.”  But Rice didn’t back down.  As she sees it, we managed to have democracy for 230-plus years without being as “polarized” as we are today.

Americans who voted in 1860 — and in 1864, when the country was split in two — would have had a different perspective on that.

Hillary didn’t label Boko Haram terrorist group because it would have hurt Obama’s reelection message
Next Post
While vets die waiting for treatment, Pentagon moves ahead with Manning sex change