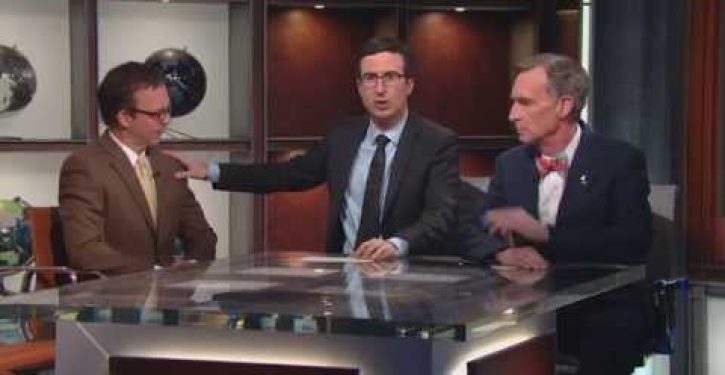 The sentiment could have come from the mouth of Barack Obama, who in his more unhinged moments thinks he has the power to pass legislation by executive fiat. But the view was actually expressed yesterday by John Oliver, host of the gratuitously profanity-laced HBO “comedy” show “Last Week Tonight.”

Bill Nye (the self-appointed “Science Guy”) made an appearance to help Oliver drive home the points that (1) the climate change debate is settled and (2) the recent revelation (via Gallup) that the 42% of Americans believe the grave consequences of climate change have been exaggerated by the mainstream media should be shouted down (if not taken out back and shot).

In the video (warning: extreme language), Oliver, a Brit, quips:

Who gives a sh*t? That doesn’t matter. You don’t need people’s opinion on a fact. You might as well have a poll asking: ‘Which number is bigger, 15 or 5?’ or ‘Do owls exist?’ or ‘Are there hats?’

The debate on climate change should not be whether or not it exists — it’s what we should do about it.

Oliver also recites the well-rehearsed refrain that 97% percent of scientists who study this issue agree that climate change is real and is the result of human activity before bringing out Nye and a dissenter to prove that he’s right. In the video, Oliver harrumphs that whenever Nye appears on television to defend his views on climate science, “it’s always Bill, the Science Guy, vs. some dude.” It seems not to have dawned on Oliver that he, too, is just “some dude” and that his liberal squawking over a subject he knows nothing about other than what he chooses to hear is more noise than light.

For that matter, Nye, whom he holds up as the modern voice of scientific reason, has only a bachelor’s degree in mechanical engineering (Cornell) and is more entertainer than scientist. But why spoil Oliver’s or his audience’s fun?

Panera CEO says raise minimum wage but plans to replace humans with computers
Next Post
Where was Obama during Benghazi? Ask the White House diarist