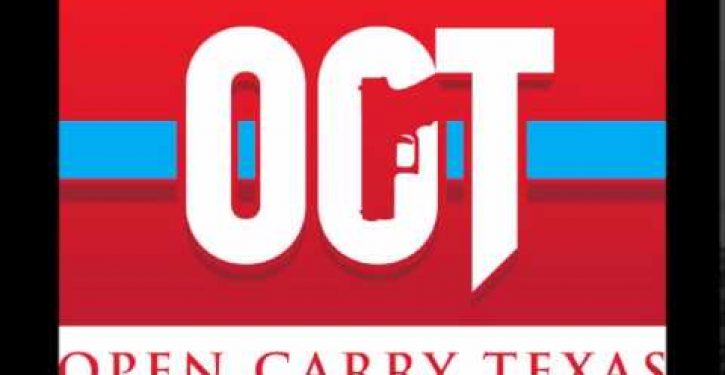 Open Carry Texas was demonstrating at a Jack in the Box restaurant parking lot in Texas. The group was spotted by a citizen who called 911, prompting the police to send ten police cars and over a dozen officers to the fast food joint.

Ken Kalthoff of the local NBC affiliate reported on the story, saying that Sgt. Ray Bush with the Fort Worth Police Department was concerned about the Jack in the Box employees, who “locked themselves inside a freezer for protection out of fear the rifle-carrying men would rob them.”

The story was picked up by the New York Times and many other national outlets, as reported at Tavern Keepers.

The gun control group “Moms Demand Action” started a social media campaign under the hashtag, #JackedUp, and the usual suspects were out in droves condemning Jack in the Box leadership for being so irresponsible.

A sample of the hysteria is evidenced in these tweets:

.@JackBox This is your manager. His employees hid in freezer from @OpenCarryTexas Are you ok w/ this? #JackedUp #NRA pic.twitter.com/jmdsEkIHRU

@MomsDemand @JackBox who will protect unarmed diners when an armed criminal comes in? Staff? They’ll just hide in the freezer.

It turns out, however, that the “freezer” narrative was false. The employees were actually very receptive to the open carry demonstrators and in fact, posed for pictures with them the day after the event, according to CJ Grisham. It is unclear why Sgt. Bush would make such as statement.

@kevinpost @OpenCarryTexas The Jack in the Box VP of communications has CONFIRMED that no one hid in the freezer.

The 911 call that prompted World War III can be heard here:

At the time of this writing, requests for a statement have not yet been answered. This article will be updated if the author hears back from the Fort Worth Police Department.

“I can tell you we have verified our earlier statement. Our officers spoke with jack in the box employees the day of the incident. Other than that we have no new information.”

The author asked for a 911 call (from the employees who hid in the freezer) and/or employee name(s) to be produced. Any updates will be added to this article.

In the meantime, Open Carry Texas also released a statement, which included a quote from Jack In The Box Director of Asset Protection Gene James:

“What I can raise my hand on and swear to an oath is that what I was told by my employees is that they did not seek refuge in the freezer. On its face, the freezer thing make no sense.”

“[W]e really don’t have any new information to give out right now.”

It should be noted that Open Carry Texas released photos on their Facebook page. The employees are seen posing with the demonstrators and otherwise going about their business:

UPDATE III: It should be noted that the photos from the Jack in the Box were taken after the demonstration. The article has been updated to reflect that change.