These days, you might ask, “Which peace talks?”  There are so many.  But we’re speaking here of that hoary chestnut, the “Middle East peace talks.”  Which went pfffft this past week after Fatah and Hamas announced a reconciliation, making Fatah – now aligned with the terrorist organization Hamas, which continues to officially pursue the goal of destroying Israel – a non-viable negotiating partner.

Inevitably, the gathering drumbeat is one of blame for Israel.  Ynet had a detail-filled piece yesterday by Nahum Barnea in which U.S. officials opened up anonymously, lugubriously, and blamefully.  Yes, they were sorry to say: it’s all Israel’s fault.  See if you can get through the Barnea article without weeping for the Americans.  Lacrimoso, now: “Wounds inflicted by a friend.” “A great insult.” “Jewish people are supposed to be smart…they’re also considered stubborn.” “Wouldn’t move more than an inch.” “Intentionally sabotaging the peace talks.”  Etc., etc., yada yada boom.

Perhaps the most telling point to make about the whole distasteful episode is that there’s nothing new to say about any of it, in May 2014 as opposed to July 2013, when I wrote at a bit more length about the pointlessness of the enterprise.  (For posterity, I append also a link to some musings on the main “new” feature of the ObamaKerry Round (actually a resurrected old one): the proposal for putting a military force of some kind in the Jordan Valley.)

The “Palestinian problem” may or may not be insoluble in the abstract.  But with the whole region in uproar because of the recession of U.S. power and the Arab Spring, no one in the mix has a compelling incentive now to try to settle a border and a modus vivendi for Israel and the Palestinian Arabs.  Far from changing since last summer, that contextual reality has only grown more important in the past year.  Geopolitically, today, all bets are well and truly off.

Other commentators are starting to recognize that, in fact.  Alon Ben-Meir wrote thus yesterday of the Fatah-Hamas rapprochement that ended the prospect of talks:

My understanding is that both Fatah and Hamas have concluded that unlike past agreements, the new accord is essential to adjust to the changing dynamics in the region and their bilateral relations. …

Hamas has been cut off from Egypt as the new military-controlled government destroyed most tunnels, preventing the smuggling of goods to Gaza, which have [sic] in the past provided a financial lifeline to the Hamas government.

The turmoil in Syria and Hamas’ decision to support the rebels deprived it of the political and logistic support that had been provided by the Assad regime. Moreover, because of the sanctions imposed on Iran, Tehran has substantially reduced its financial aid and military supplies on which Hamas relied heavily in the past.

Although much of Ben-Meir’s piece misses the mark, he is quite right that Hamas is reacting to a change in regional conditions.  Fatah is too, for that matter (although Ben-Meir is less clear on that), and so are the members of the Arab League, which throughout the ObamaKerry Round have urged Mahmoud Abbas to refrain from making concessions.  An agreement with Israel isn’t just a low priority now: it could actually be a stupid move, a tactical error that could become a costly inconvenience in the near future.

I admit to impatience with the endless parsing of an old and busted paradigm, and I apologize for that in advance.  But who has the time?  I just can’t keep rehashing a set of tedious, Oslo-tethered dynamics that never change, especially given that the framework in which those dynamics have played out since 1993 has collapsed.  Its predicate was U.S. power and an unchallenged status quo, and that base is gone.

So I’ll restrict my commemoration of the ObamaKerry Round to a couple of observations on the Barnea piece.  One relates to art – and perhaps to the priorities of policy – and so indirectly to substance.  Barnea is careful to record the following:

Using advanced software, the Americans drew a border outline in the West Bank that gives Israel sovereignty over some 80 percent of the settlers that live there today.

“Using advanced software”?  What is that, a clumsy product placement of some kind?  And were the Americans also drinking a refreshing beverage, and using a cost-effective wireless data plan?

Maybe it’s meaningless, but when you think about it, it can’t be.  Barnea would only have phrased it thus because the point was emphasized to him.  The little clause radiates misdirected zeal: we’re doing geopolitics here, peace negotiations, the future and the fate of peoples, and what U.S. insiders want to convey to the world is that they used advanced software to draw a border outline.

The other point starts with recognizing the doom of the ObamaKerry Round in the outlines of the peace process’s systemic dysfunction.  Barnea again, relaying the sentiments of the U.S. insiders:

The negotiations had to start with a decision to freeze settlement construction.

Right.  So Israel could only get to the negotiating table by effectively making one of her top final-status concessions in advance, and for no tangible benefit to Israel.  And we’ve been over this ground how many times before?

Yet – and here begins the point – the Obama administration, in the person of John Kerry, went league upon weary league trying to bring about negotiations that from the outset had no realistic prospects.  In the process, the U.S. administration laid all its cards face up on the table.  It shot its wad.  Drawing borders, hinting at international military forces, rumoring U.S. participation, even – and sparking instantaneous repudiation from Congress and the American public; lobbing mob-boss threats about Israel’s “sustainability” at Netanyahu; arm-twisting Israel to release hundreds of terrorists from prison; whispering “Jonathan Pollard”; coming out at the bitter end with a hysterical “apartheid” accusation like a screaming, crying undergrad in need of sedation and therapy.

Team ObamaKerry played its ace – and then pulled more “aces” from its sleeve.  The whole world knows now every length to which Obama and Kerry were prepared to go, to force a resolution that’s not even relevant anymore.  (Quite a contrast, incidentally, with the administration’s half-hearted, perfunctory approach to crises that are actually changing the map and the state of power relations between the nations.)

And now we sit with all the cards – played out of turn, played with incontinent urgency – on the table, and Israel hasn’t folded.  The saloon is full of outlaws with guns, watching in restless bemusement, and Team ObamaKerry is pointing at the table, and at Israel, and wailing.  Nothing has changed since July, because nothing actionable has happened since July.  Except that the Obama foreign policy team has exposed itself, fully and entirely, for what it is.  That, unfortunately, is actionable information mainly for the bad guys. 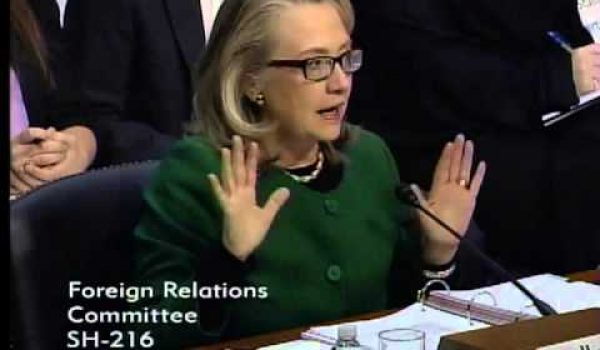 The question remains: Where are the Benghazi survivors?
Next Post
Iran’s president urged to ‘punch Obama in the mouth’