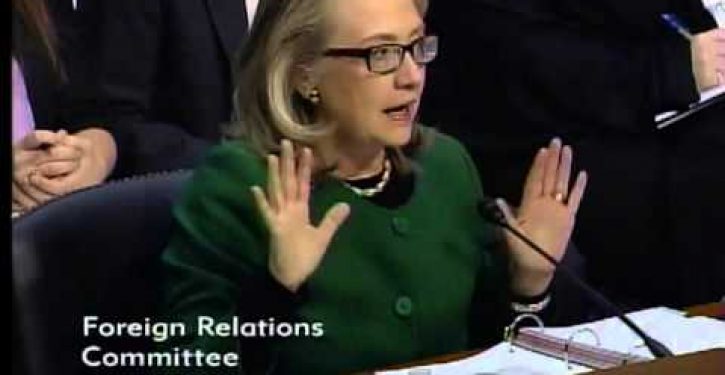 One of the most basic unanswered questions remaining after the horrific attack in Benghazi on Sept 11, 2012 surrounds the Americans who survived that night.

About three weeks after the terror attack, a father of one of the survivors, Rex Ubben, said “people understood ‘mistakes and lack of foresight do happen,’ but, ‘to attempt to delay or cover information up, upcoming election or no, might put other people’s lives at risk and fools no one.'”

Further, he said his son David “described the violence on Sept. 11 as ‘obviously an attack and not a riot.'” But few of the other survivors have been interviewed or identified. Where are they? There have been some little-noticed, but striking allegations made surrounding the Benghazi survivors.

“My understanding is that we still have some people in the hospital. I’d like to visit with them and wish them nothing but the best but the State Department has seen it unfit for me to know who those people are—or even how many there are.”

In January 2013, during a Senate Foreign Relations Committee hearing, former Secretary of State Hillary Clinton testified that there were 25-30 survivors and that she only spoke to one of them (it would not be a stretch to believe that she spoke with David Ubben). She said,

“I‘ve spoken to one of them, but I waited until after the ARB [Accountability Review Board] had done its investigation because I did not want there to be anybody raising any issue that I had spoken to anyone before the ARB conducted its investigation.”

The transcript can be found here.

In March 2013, Chaffetz said he managed to speak with one of the fathers of the survivors but was told:

“Yes, this person is at the Bethesda Naval Hospital, but you will not be able to find him because the State Department changed his name on all his records.”

“The White House is certainly not preventing anybody from having any access to the survivors of the Benghazi attack.”

“Cooperation with and briefing of members of Congress continues in the investigation, as appropriate, and has been in keeping with the incredible amount of cooperation we have provided to Congress, and all of their inquiries with regard to the Benghazi matter.”

In March 2013, John Kerry was asked by Fox News correspondent James Rosen why nobody has “heard from” the Benghazi survivors. Kerry stumbled through the answer, saying

Rosen pressed John Kerry on the issue by asking, “Will we hear from them?” Kerry responded:

“I can’t tell you – I don’t know what the circumstances are of any requests to talk to them or not.”

In April 2013, Kerry was asked about the status of the Benghazi survivors again by Rep. Dana Rohrabacher of the House Foreign Affairs Committee.

“I can promise you that if you’re not getting something that you have evidence of or you think you ought to be getting, we’ll work with you. And I will appoint somebody to work directly with you starting tomorrow, with you, Mr. Chairman, to have a review of anything you don’t think you’ve gotten that you’re supposed to get…we got a lot more important things to move on to and get done.” [emphasis added]

In May 2013, former US deputy chief of mission in Libya Gregory Hicks named some of the survivors during testimony (prompting Darrell Issa to ultimately issue subpoenas for Alec Henderson and John Martinec. As reported at the LA Times, “On Oct. 8, Henderson was interviewed for eight hours. Martinec went next, for five hours on Oct. 10. No prosecutors or FBI agents were allowed inside. But the witnesses were accompanied by their attorneys.”)

In July 2013,  Rep. Frank Wolf made this bold claim on the House floor:

“According to trusted sources that have contacted my office, many if not all of the survivors of the Benghazi attacks along with others at the Department of Defense, the CIA have been asked or directed to sign additional non-disclosure agreements about their involvement in the Benghazi attacks. Some of these new NDAs, as they call them, I have been told were signed as recently as this summer.”

In July 2013, Senator Ron Johnson questioned Victoria Nuland about the Benghazi survivors during her confirmation hearing before a Senate panel. He said,

“Unfortunately, there are an awful lot of questions that still remain about what happened following Benghazi, and quite honestly, before it. For example, we still have not been given the names or access to the survivors…”

In August 2013, CNN reported that a source said there were 35 survivors of the attack.

“Since January, some CIA operatives involved in the agency’s missions in Libya, have been subjected to frequent, even monthly polygraph examinations, according to a source with deep inside knowledge of the agency’s workings.” [Emphasis added]

In September 2013, the father of Navy SEAL Tyrone woods, Charles, said that one of the survivors, “Information Officer Peterson,” reached out to Mr. Woods after the attack and told the grieving father that “Ty” saved his life. Mr. Woods said that Peterson “sent a very touching email and on two occasions we did get to visit.”  However, Charles Woods explained that he has since been unable to contact him. He said that his email and phone are no longer available.

In September 2013, Sharyl Attkisson tweeted, “Secy Kerry tells congress he will not honor the request to make Benghazi survivors available for questioning.”

In October 2013, Catherine Herridge of Fox News reported that the State Department refused to release transcripts of the interviews initially conducted by the FBI with the survivors. She wrote,

“The Justice and State departments are now citing a year-old FBI investigation and a future criminal prosecution to block access to survivors of last year’s Benghazi terror attack.” Herridge continued, “[Senator Lindsey] Graham has been asking since last year for the FBI’s transcripts of interviews with State Department and CIA survivors who were evacuated to Germany after the Sept 11 attack on the U.S. consulate.”

In October 2013, Assistant Secretary of State Julia Frifield wrote a letter to Graham, saying in part that the State Department has “serious concerns about having the survivors of the attack submit to additional interviews.”

In November 2013, Rep. Ed Royce of the Committee of Foreign Affairs sent a letter to Secretary of State John Kerry asking for access to the survivors.

In January 2014, declassified documents redacted the number of Benghazi survivors:

“In September 2012, there were three Diplomatic Security agents assigned to the Temporary Mission Facility, while there were nine security officers out of a total of [redacted] individuals at the CIA Annex.”

“We do not know why the FBI has not released to Congress the FBI interviews of the Benghazi survivors.”

Today I announced a subpoena requiring Secretary Kerry to testify at a public @GOPoversight hearing on May 21. #Benghazi — Darrell Issa (@DarrellIssa) May 2, 2014

A State Department official told the Huffington Post that the “department is ‘surprised’ by Issa’s subpoena, given State officials have been ‘cooperating all along with the committee.'” The official snidely remarked that Kerry “is scheduled to be in Mexico on May 21,” and Issa’s committee “would have known if they had reached out to us instead of issuing a subpoena by tweet.”