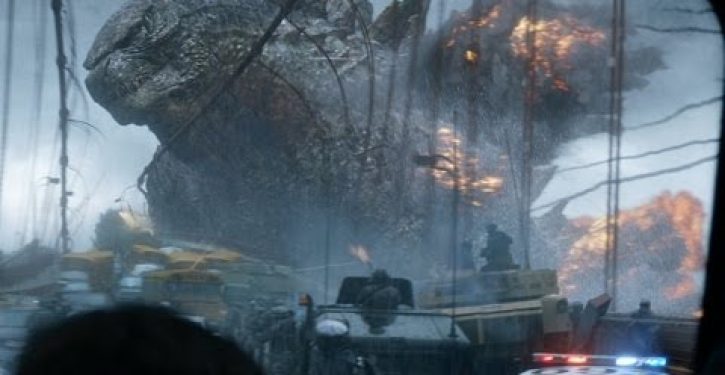 With America’s collective waistline expanding here in the land of plenty, the citizenry’s thick thighs and rotund rumps have become the butt of jokes by residents of nations who have yet to realize that in the United States, Taco Bell advertises that a 2 AM visit is rightfully considered the fourth meal of the day. And to add fat-shaming insult to excessive weight injury, our alleged friends in Japan are slamming the latest American version of Godzilla as a “calorie monster” and when you get right down to it, downright laughable, as reported by Time Magazine.

With Samurai swords and extreme wasabe not the only Japanese exports known to kill, Godzilla (ゴジラ Gojira) has been a huge fan favorite in Japan since the early 1950’s. Gojira (ゴジラ), a portmanteau of the Japanese words: Gorira (ゴリラ, “gorilla”) and kujira (鯨（クジラ）”whale”), picked up its own version of nuclear generated steam in the United States when American b-lister Raymond Burr wheezed his way though 1956’s “Godzilla, King of the Monsters!” thusly ensuring the Japanese Gorilla-Whale would be forever ingrained in American culture, even to the point when American heavy metal band Blue Öyster Cult released its 1977 head-banging homage to the building busting cult anti-hero.

With this month’s release of the latest installment of the slew of Godzilla movies in the US, there is real hope that Godzilla will finally appeal to both the mainstream and Main Street. Especially with Japanese acting heavyweight Ken Watanabe as one of the lead actors, this reboot has real hope. Yet hard-core Godzilla fans in the Land of the Rising Sun are slamming the American version as just plain fat.

Perhaps jumping on the cellulite-slamming bandwagon, a number of Japanese have taken to the internet to voice their displeasure with the pear-shaped radioactive reptile. Identified as Fumihiko “Super-Fan” Abe, he was quite plain-spoken as a Tokyo exhibition of paintings of the 2014 incarnation of his hero:

When I finally saw it, I was a bit taken aback. It’s fat from the neck downwards and massive at the bottom.

As Time noted, “Other fans joked online that the American version of the monster had ‘done a super-size me,’ calling it ‘a calorie monster’ and ‘Godzilla Deluxe.’ And perhaps the most cutting insult of all, posted to a Japanese forum, read, ‘He’s so fat, I laughed.’

Here, as a bonus for Blue Öyster Cult fans, is a video of the aforementioned tribute:

Charges dropped against Muslim woman nabbed shoplifting at Macy’s
Next Post
Obama ‘deeply troubled’ by Okla. execution, not so much by Kermit Gosnell