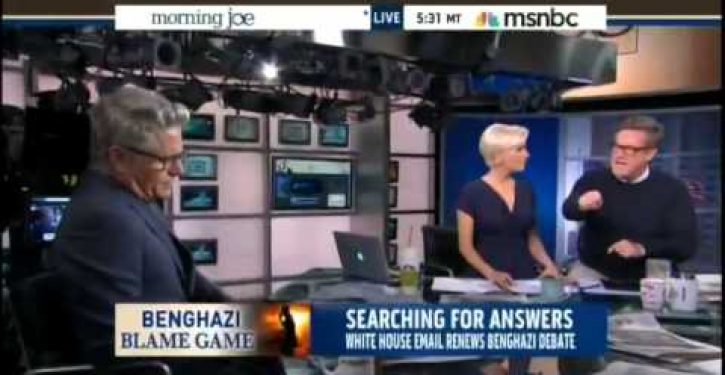 In this corner, you have former Republican congressman and current MSNBC host Joe Scarborough. And in this corner, you have media personality Donny Deutsch. The topic is whether the White House’s claim on Tuesday that the newly released documents on Benghazi  are really about tensions in the Middle East at large.

Deutsch cautions that the new revelations are “fool’s gold” for the Republicans, that if they focus on Benghazi in 2016, they will pay dearly for it because the American public is fed up with the topic.

As the Foundry notes, Scarborough responds with a blistering attack on the Jay Carney, the White House, and Deutsch himself:

You see the White House spokesperson lying on national television. You see an ABC newsperson shocked that he’s lying and treating the press core and Americans like they’re stupid. He says it’s not about Benghazi. Republicans and conservatives have been called fools for a year now for saying this happened. They don’t release it with the original documents that are released. They finally, reluctantly, are forced to release it then you have the White House lying about yesterday saying it’s not about Benghazi, and your only reaction is, “Hey Republicans better not overreact to the cover-up.”