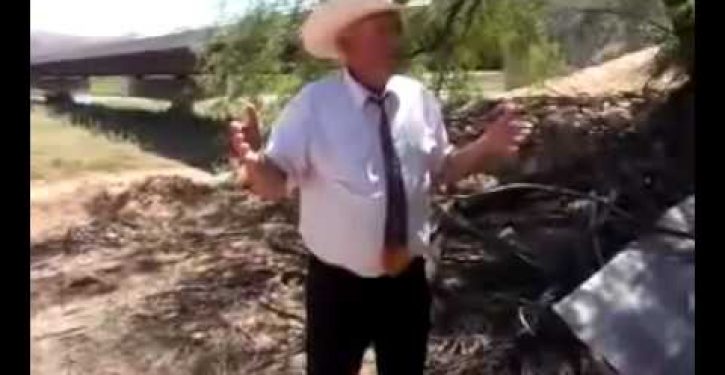 Hadas Gold of Politico reported on the “story behind the Bundy quote,” saying that upon hearing Bundy’s statement, Nagourney “immediately knew it was going to be big.” One can practically picture the journalist salivating as he was recording the embattled rancher, keeping his “head down.”

“It’s just one of those things you hear it and you go this is really news, N-E-W-S,” he said.

Nagourney only reported the most controversial part of Bundy’s quote, where he said:

Before Bundy made his famous assessment on the plight of the “negro,” he said [as reported at the Conservative Tree House],

Here, via Pat Dollard, is the complete video:

But Nagourney did interview Rob Mrowka of the Center for Biological Diversity, who has referred to Bundy’s supporters as “outlaws, anarchists and terrorists,” as reported at Liberty Unyielding. It seems that Mrowka’s reference to protesters as “terrorists” is not nearly as offensive as the word “negro.”

Cliven Bundy’s bodyguard Jason Bullock was grilled by CNN about the statement, as posted at RealClearPolitics. It is painfully obvious that the “journalist” interviewing Bullock is trying really hard to get his own soundbite:

CNN REPORTER: You’re protecting this man and he’s wondering whether African-Americans would be better off as slaves. How does that strike you?

JASON BULLOCK, BODYGUARD FOR CLIVEN BUNDY: It doesn’t strike me any kind of way. This is still the same old Mr. Bundy I met from the first day of all this happening.

CNN REPORTER: But aren’t those offensive comments to you?

BULLOCK: Not at all.

BULLOCK: Because Mr. Bundy is not a racist. Ever since I’ve been here he’s treated me with nothing but hospitality. He’s pretty much treated me like his own family.

BULLOCK: I would take a bullet for that man, if need be. I look up to him just like I do my own grandfather.

BULLOCK: Because I believe in his cause and after having met Mr. Bundy a few times, I have a really good feel about him and I’m a pretty good judge of character.

The witch hunt was on for Cliven Bundy the moment he dared to challenge the federal government. Cliven Bundy may not be the most politically correct individual, but he certainly can not be called a racist based on the “gotcha” quote so excitedly and irresponsibly reported by Adam Nagourney.

Yet, as J.E. Dyer observed,

“After the selectively edited comments of Cliven Bundy were presented to the world yesterday, by our biased and frequently discredited mainstream media … high-profile conservative pundits and politicians suffered a complete loss of intellectual function.”

J.E. makes the point that the mainstream media has already vastly discredited itself. Yet, instead of some of the strongest voices for freedom jumping at the chance to call for context and focus on the very real issue of government overreach, they sickeningly joined the witch hunt.

“It was as if a bell rang, and they all went limp and inert, incapable of giving more than a single, conditioned response.”

If Cliven Bundy, an American citizen, can be attacked for his honest albeit politically incorrect statement, will that encourage or discourage others to speak their minds? The lessons of history are being ignored. Freedom is a tenuous and rare thing. Americans have perhaps enjoyed freedom for too long to truly understand how easily it can be lost. If those who have the largest platform cannot be fearless in their defense of freedom, the republic stands little chance of overcoming the tyranny that surely awaits.