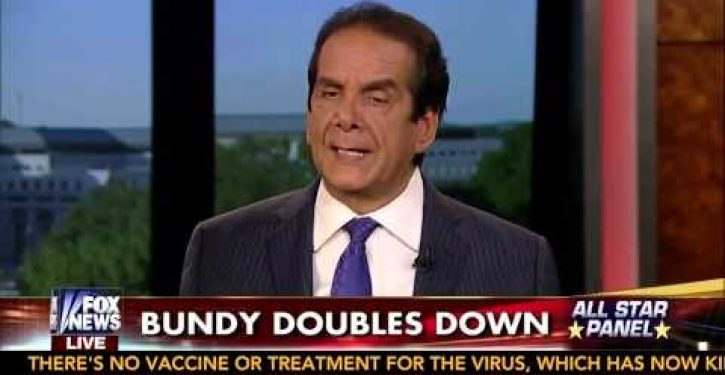 I’m not sure I’ve ever been this disgusted.  After the selectively edited comments of Cliven Bundy were presented to the world yesterday, by our biased and frequently discredited mainstream media (see below), high-profile conservative pundits and politicians suffered a complete loss of intellectual function.  That’s the only thing we can call it.  We’ll designate it CLIF, for short, because it’s going to keep coming up in the discussion.

Only 24 hours before, most of the same individuals were able to parse the core issues in the Bundy crisis – the relationship of the state to the citizen, the meaning of federal sovereignty and property rights, the lawful use of government power – with some degree of intellectual rigor.  Not all of them saw value in doing it, but most of them were able to.

Then the media presented an edited soundbite which manages to depict Bundy as a racist, according to the Stalinist-propaganda-poster definition we now use.  And the reaction of pundits and politicians was a Pavlovian intellectual paralysis.  It was as if a bell rang, and they all went limp and inert, incapable of giving more than a single, conditioned response.

That response, of course, was to sweep aside the merits of every other argument, and let the charge of racism – irrelevant, unrelated, virtually always mendacious and manufactured – win the point.  Watching Charles Krauthammer surrender to CLIF yesterday, during Bret Baier’s evening broadcast on Fox, was especially discouraging.

On this thin thread hangs the fate of the republic.

It would be easier, certainly, to just give up, move to Belize, and hope I die before the world goes completely to hell.  But I’m not going to do that.  The Bundy crisis is too important to the fate not just of America, but of the world.  It’s about the proper limits of government, and the citizens’ authority to set those limits.  What has brought us to the crisis is a political movement to trample the citizens’ authority, in favor of an unlimited use of government to manipulate the people in the name of ecological hygiene.  The end result, in each case where this principle prevails, is corruption of government and commerce, and extortion of the people.

Cliven Bundy’s campaign plan and tactics may be flawed.  But the hill he has chosen to die on is the terrain for which we have to fight.  If we don’t establish what the relationship of the federal government is to the land and our property rights, with clear principles, and prescribed definitions and limits, we cannot sustain any other feature of American liberty.

I emphasize “establish” because that’s what has to be done. We can’t wait around hoping that the Supreme Court, and decades of unchallenged usage, will eventually triangulate us into a regime of sovereignty that we can live with.  We, the people, have to speak.  We have to demand and insist on a sovereignty principle that sets proper limits on the federal government, and respects our inherent rights.

Here are the things that must be said, to frame our proposition.

1.  This crisis isn’t about grazing rights.  It can’t be dismissed by specious analogies to grazing livestock in Central Park – or even by narrow but less specious arguments that Bundy should have just paid fees to the federal government.  This crisis is about the relationship of the state to the citizen, the meaning of federal sovereignty and property rights, and the lawful use of government power.  What we allow to be done to Cliven Bundy will effectively decide the future of those questions – very possibly through unchallenged usage, rather than through thoughtful choice and due process of law.  Bundy and the ragtag militiamen at his ranch see that far more clearly than conservative pundits do, even if they don’t express themselves elegantly.

2.  It doesn’t matter to the core issues whether Cliven Bundy is a racist or not.  It’s irrelevant.

For what it’s worth, having now seen the entire clip of the passage in which he spoke about blacks on welfare (and “Mexican” immigrants), I don’t think he is a racist.  You’ll have to make up your own mind about that.  Here’s the full clip, courtesy of Pat Dollard:

Dollard has the media-edited clip as well, if you want to compare the two.

It’s also worth comparing Bundy’s complete comments to those of Bishop E.W. Jackson, who ran for lieutenant governor of Virginia in 2013 (h/t Steve Robinson):

(For an extended treatment by Jackson of blacks, social pathologies, and Democratic policies, see this four-minute clip.)

Although the charge of racism doesn’t merit talking about further, the issue of communication does.  This issue matters specifically to the topic at hand – the future of man and the state in our republic – and this is the place to address it.

I wouldn’t have spoken in the terms Bundy used – even the terms that become clearer in the full clip.  But that’s not because his terms were “racist.”  Allowing our thoughts and speech to be boxed in by buzzword categories like that is death to the intellectual foundation of liberty, and we can’t let ourselves be driven over the CLIF by this method.  We are the biggest fools who ever walked the earth, if we sell a republic of liberty down the river because we’re afraid of challenging a rhetorical orthodoxy that functions only as a red herring.

The reason to be disciplined and have a different policy about our speech is so that we can (a) encourage people, rather than just talking incessantly about what’s wrong, and (b) shape the debate, to the benefit of our fellow men and all we hold dear, and then win it.  I don’t necessarily expect Cliven Bundy to observe that kind of discipline.  Rhetoric and suasion aren’t his game.  But they’re mine – and they’re Charles Krauthammer’s – and if the republic is to survive, there is no one else who will step in and slap down the “racism” gambit in favor of the precise and relevant thinking on which the principles of liberty depend.

3.  Merely sitting by and allowing lawsuits and regulations to define our effective view of what federal sovereignty means is an untenable proposition for ordered liberty.  We don’t have a body of law and jurisprudence that will spit out the “right” answer on this question, like a well-programmed computer.

Americans have grown lax about waiting for the Supreme Court to rule on important matters, as if the Court’s authority is higher than the people’s.  But on this question, the courts will be divided and uncertain – as they have been for decades – and it’s the people who must take responsibility to speak, if we are to get an outcome we can live with.

I believe the dispute over the meaning of property rights and federal sovereignty is one of the best reasons we have to call an “Article V” convention of the states.  It is an issue so fundamental in character that we can’t simply accept our political processes, in the state to which they have devolved, as the means of deciding it.

4.  The stakes are exceptionally high.  The land is our livelihood and our refuge from tyranny.  Understanding that we have a right to establish an individual relationship with it is integral to the dignity and authority of the individual that undergird all of our liberties.

U.S. law does not prescribe the kind of federal sovereignty envisioned by (mostly) environmental activists: a sovereignty under which territorial regions are “managed” peremptorily and holistically, for abstract ecological purposes, independent of property rights or jurisdiction.  But the proposal of activists is to herd our regulatory practices in this direction, as if U.S. law prescribes the definition of sovereignty that’s necessary to do it.

It’s done mainly through indirection and attacks on the vulnerable: small property owners, and rural cities and counties.  It doesn’t declare itself, or request an open, explicit debate on the principle of unlimited sovereignty.  It even avoids court rulings where they would be unfavorable, preferring to extort un-adjudicated settlements that will eventually function as precedents.  We’ll discuss all that in Part II.

In Part III, we’ll look at the companion to this unlimited-sovereignty proposition: the actual execution of it.  Harry Reid, crony corruption, and rent-seeking against the people will have starring roles in Part III, because when sovereignty is expanded without an honest accounting of its intentions, and a deliberate setting of limits, there is no such thing as expanding it without corruption.

Fasten your seatbelts.  The life of the American republic hangs in the balance.  If we get this one wrong, none of the rest of it will matter.