In early 2008, the consensus in the media was that that if Hillary Clinton lost the Democratic nomination and Barack Obama won the presidency and served for two terms, Clinton’s chances of becoming president would be dashed. “She will be too old to run in 2016” more than one commentator observed.

All of those what-if scenarios have since been fulfilled. In the intervening years, moreover, Clinton logged several thousand exhausting travel miles logged as Secretary of State, suffered a concussion  that precipitated her wearing of Coke-bottle lenses, and learned recently that she is about to become a granny (which is included here only as a reminder that she is getting up in years).

Nevertheless, now that the 2016 election is on the horizon, if still a dim speck, the question of whether Hillary is too old to run is back on the minds of political writers. In February, the National Journal’s Charlie Cooke offered up this analysis:

Clinton turns 67 this October. At that age, she will likely be making her candidacy decision, and if nominated Clinton would turn 69 two weeks before the 2016 general election, notably the same age Ronald Reagan was when he was first elected in 1980. The choice to run for president is effectively a nine-year commitment: one year to run, another four years if she wins a first term — finishing up that term at age 73 — and then, assuming she runs for reelection and wins, serving four more years to end a second term at 77 years of age. None of this is to say that the age issue could successfully be used against her. After all, Reagan won the presidency at the same age. But how many 67-year-olds make nine-year commitments, and what concerns have to be addressed if they do?

Writing at his blog the Mental Recession, LU’s Rusty Weiss reminds us that the question of age arose when John McCain, two years Clinton’s senior, clinched the GOP nomination in 2008.

Putting aside entirely Hillary Clinton’s political resume, which includes a stint as both U.S. Senator and Secretary of State, Pete Seat, a Republican writing at Politico, constructs an interesting generational paradigm for determining the likelihood of Clinton’s winning if she runs. It is based on the number 19:

That’s the average number of years served in office by each generation’s presidents. Again, the Greatest Generation served the longest time, 32 years, which might have been even longer if not for the truncated terms of Kennedy and Richard Nixon, and the one-termers, Jimmy Carter and Bush Senior. By the time Obama leaves office in January 2017, the [baby] boomers will have collectively served an above-average 24 years in office. Should another boomer win the White House and serve two terms, it would tie the Greatest Generation’s 32-year tenure.

Finally, there is the question of genes. In this regard it can be noted that Hillary comes from a line of long livers, as they say. 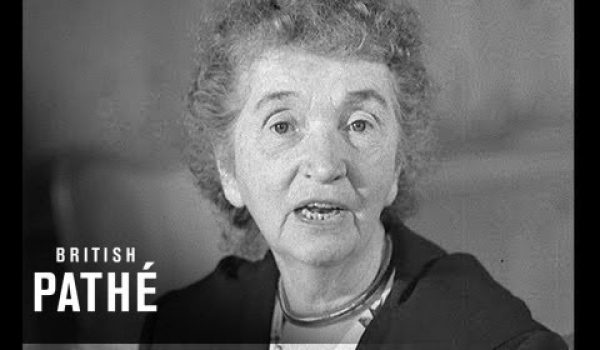 Video: Planned Parenthood founder calls for ban on childbirth
Next Post
Cartoon of the Day: Rotten to the (Common) Core