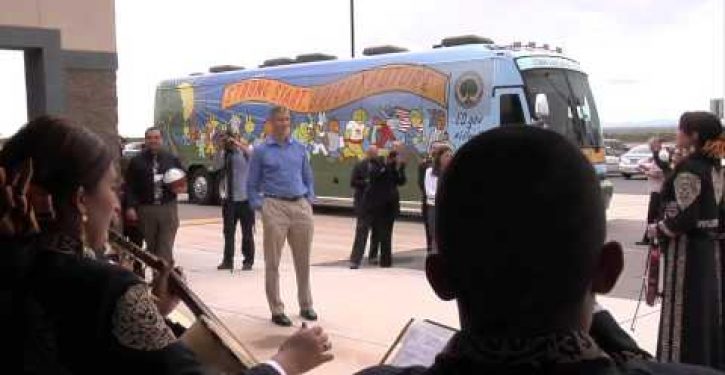 Harry Reid considers law-abiding Americans to be “domestic terrorists.”  But there are other people who inspire some of the nation’s top Democrats.  They’re not Americans, and they’re not law-abiding.  They seem to get some of our leaders’ heart rates up, however.

One such leader is Arne Duncan, secretary of education.  Duncan was – inevitably – CEO of the Chicago Public Schools, before being tapped by President Obama in 2009 to take over the U.S. Department of Education.  He’s known for having something of a ‘tude about “white suburban moms.”  But in 2013, visiting Columbus, New Mexico, he waxed rhapsodic about foreign mothers who dart over the border to give birth, and then later send their 6- and 7-year-old children across the border each day to attend school in the United States.  In his words, it is “frankly inspiring.”

Hillary Clinton is not to be outdone in this department.  She participated on 17 April in an event at the Lower East Side Girls’ Club in Manhattan, entitled “Girls: A No Ceilings Conversation.”  Clinton was taking questions when a young woman named Nova took the microphone and announced that she is undocumented.

“I have a very different glass ceiling than some of the girls are exhibiting here. For the first time publicly I want to say that I’m an undocumented immigrant,” said the woman, named Nova, who quickly began to tear up after receiving some applause. “I want to say that it’s been extremely difficult for me to empower myself in America because I came here illegally when I was five. And I came from Split, Croatia, where I was born.”

“It’s been very hard because I don’t have the documentation here: to get a job; to vote–which is essential, obviously, to [get] representation; to buy an apartment; to go to college–so I couldn’t even go to my dream college because of that; to get no financial aid,” Nova continued. “I want to ask what in your sense is essential for immigration reform because girls like me–and I’m not the only one here, there are 11 million people standing behind me here and I can only imagine how many girls there are.”

“Because this is an extreme glass ceiling for me that I can’t even control,” she said. “Not even as a woman but not even as a human.”

I admit to finding this something other than inspiring.  “Frankly suspect” comes to mind.  (Croatia?  When this young woman was five, Croatian refugees from the Yugoslav civil war were being admitted right and left on an asylum basis.  What happened?)

But Hillary, according to the story, ate it up:

“Oh Nova,” she began, pausing for a second. “Wow. That was incredibly brave. And I thank you for doing that because it’s important to put ourselves in other people’s shoes. That’s one of the big hopes I have, is that we can get back to being a country where people can understand what others are going through and have empathy for it and really try to help each other.”

And now you know what it takes to impress a Democratic public official.  Just be sure not to come across as independent, self-sufficient, or law-abiding.

Harry Reid is not the only one bashing #BundyRanch protesters
Next Post
Cartoon of the Day: Cooking the books on Obamacare