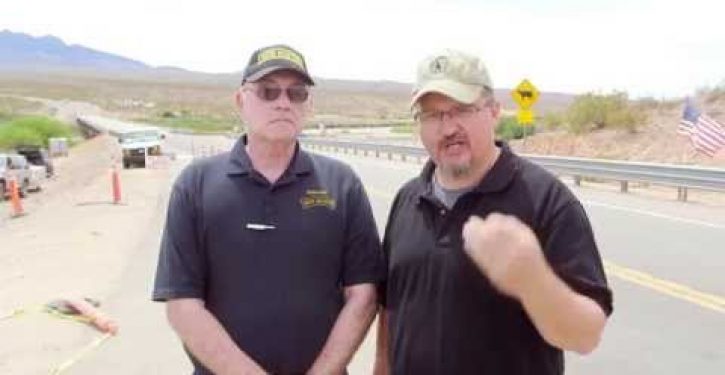 Stewart Rhodes, founder of Oath Keepers, posted a video online requesting a “call to stand” with Nevadan rancher Cliven Bundy on Wednesday. Their website, coincidentally (or not) has been inaccessible.*

The Oath Keepers are asking for donations for supplies, if the trek to Nevada is not possible. They also ask for prayers.

In the video, Rhodes requested that the Oath Keepers continue to come to Nevada, clarifying that it is “not an emergency right now,” but asking for a rotation of the guard, in the case of a “potential raid” on the Bundy Ranch in Nevada. “It is a very real possibility,” he said.

According to a cached version of their website, the Oath Keepers are gathering in Nevada “to prevent bloodshed and to stand in defense of hardworking rural Americans who are under assault by a runaway federal government.”

As reported last week, the Bundy family was confronted with armed federal agents sent by the Bureau of Land Management (BLM) who attempted to confiscate their cattle. They cited unpaid “grazing fees,” but it is not about grazing fees. Cliven Bundy has been battling the federal government and radical environmentalists for decades for the right to graze their cattle on “public” land.

The Oath Keepers, along with many other concerned citizens, traveled from across the country to support the Bundy family and a tentative deal was worked out, but as Senate Majority Leader Harry Reid indicated this week,

What happened to the Oath Keepers website on Wednesday? Perhaps it is just a technical glitch.

“@Egil_Skallagrim: @PaulReverePress idk when site was last up, but it appears wiped clean pic.twitter.com/vvv6r1qdrP” #oathkeepers

Might mean something OR nothing at all BUT the website for #OathKeepers who voluntarily protect #ClivenBundy has been shutdown. #TeaParty — David McMichael (@UncleWaldoe) April 17, 2014

ALERT!!! #OathKeepers site is DOWN following a call for boots on the ground at the #BundyRanch Spread the word! #Tcot #TeaParty — Meanwich Mike (@RightoftheRight) April 17, 2014

@ReneeNal screenshot shows that no servers in the world right now show http://t.co/oODJk98ogx as a valid site. It is a total take down — Paul Revere (@PaulReverePress) April 17, 2014

@PaulReverePress @ReneeNal type nsookup on your computer. Nothing found. Go to any lookup, like mxtools, nothing found. I found one server — Christian Rhoades (@RhoaChri) April 17, 2014

@ReneeNal @PaulReverePress DNS records don’t just go away. There are seed servers all over. I run my own DNS server for this reason.

Watch the “call to stand” here:

*The website seems to be back up, and  statement reads in part,

“Earlier this morning our server along with thousands of others went down. This was caused by a problem at the data center that houses the Oath keepers servers.”