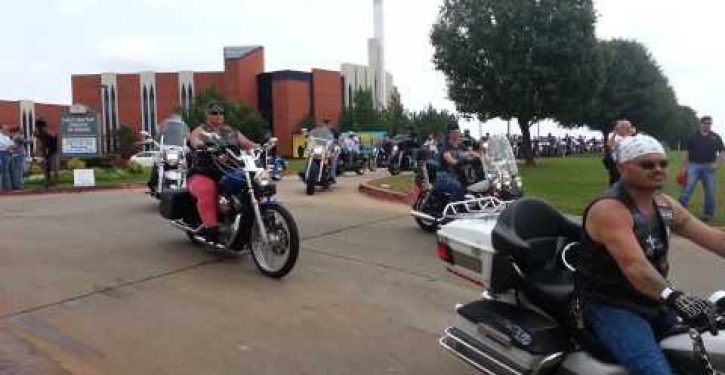 However much they may be drowned out by Patriot Guard riders, the traveling “protesters” of the infamous Westboro “Baptist” congregation of Topeka, Kansas, who specialize in taunting the bereaved at funerals with placards proclaiming “God hates f**s,” usually manage to stay on the picket line for more than six minutes.

On Sunday 6 April, however, they met their match in the citizens of Moore, Oklahoma.  Moore is the Oklahoma City suburb that was hit by an EF5 tornado on 20 May 2013, in which 24 people were killed and 377 injured.  More than 1,100 homes were destroyed.  People across America remember the anxiety during the rescue effort at Plaza Towers Elementary School, where seven children lost their lives.

In the week after the tornado, the Westboro gang showed up to taunt mourners at a funeral in Moore, and were walled off during that event by a team of riders.  This past weekend, the Westboro faithful were in Moore just to continue their “ministry” of publicly proclaiming the anger and hatred they attribute to God.

But a crowd of counter-protesters was having none of it.  KOCO 5 Oklahoma City had the story:

Several onlookers have posted their own videos as well.  One perspective on the precipitate flight of the Westboro goons (who literally ran from the surging crowd to get to their vehicles):

Westboro also ran afoul of Oklahomans back in 2010, when its members traveled to McAlester, Oklahoma, to protest the funeral service of Army SGT Jason McCluskey.  According to the Tulsa World, the Westboro contingent discovered that the tires on its bus had been slashed.  No one in town would provide assistance with that problem, however, and the Westboro group had to call out of town for a tow truck.

Amnesty as moral imperative
Next Post
Before 1993, there were no mass shootings on U.S. military bases