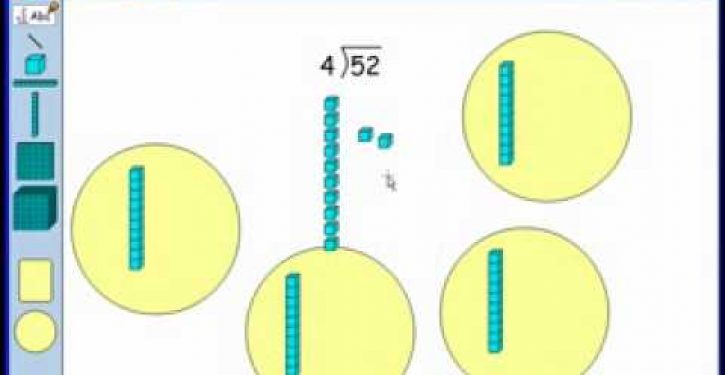 Michael J. Petrilli has been fighting a courageous uphill battle. Petrilli, who is an executive vice president of the Thomas B. Fordham Institute, has written extensively on the gross misunderstanding of the Common Core Curriculum Standards, predominantly by commenters on the right. In one of his articles, he even takes LU’s own Renee Nal to the toolshed for citing a resource in one of her posts — a factoid from the website Infoplease.com — that Petrilli harrumphs “has absolutely zero to do with the Common Core.”

Renee’s piece never claimed that it did — but fine. Let’s focus instead on a website that was expressly created with an eye toward meeting the Common Core Standards. The site, UClass, is a collection of “vetted resources created by teachers.”

Each lesson plan, worksheet and assessment has passed our Common Core inspection with flying colors, making it easier than ever to teach any standard effectively in your classroom.

Skimming the wealth of teaching ops on the math page, I couldn’t help but notice that one of the lessons, by a Mrs. Noland, is titled “Where My Tens At?” It’s hard to know whether the use of “ebonics” is also permitted in the teaching of language arts, but we’re drifting away from the main point. Our lesson for today is “Real World Division” by Maureen Devlin. The task in the UClass video that follows is to divide 52 by 4.

Now you probably think the best way to solve this is to divide the first number in the dividend (that’s 52) by the divisor (4) and write the result (1) in the tens place of the quotient. You’d be wrong. Here’s the Common Core way:

The video (which models the division) is two minutes long. By the time you’ve finished watching, you will have had the time to complete as many as 24 problems of this sort. But you won’t have learned the important generalizations communicated to tomorrow’s captains of industry thanks to the Common Core Curriculum Standards. And what exactly are those unique benefits? I will leave it to Maureen Devlin, Mrs. Noland, or Michael J. Petrilli to explain.

Peace in our time: Navies on the move
Next Post
White House drastically curtails D.C. counterterrorism drill for some reason