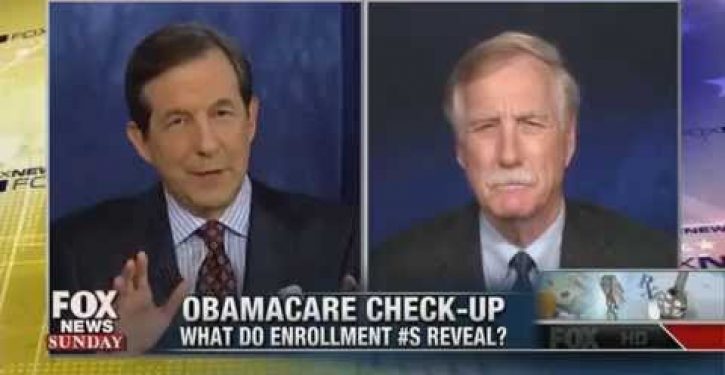 Would that it were so! The words are those of Senator Angus King, of Maine, who is registered as an independent but caucuses with the Democrats. King is one of six moderate left-leaning senators who are sponsoring legislation to fix the badly broken health care law.

The senator was a guest on yesterday’s “Fox News Sunday” to rebut criticisms of the health care law by Republican Senator John Barrasso (Wyoming). The first part of the segment is devoted to the administration’s boast of 6 million enrollees. Barrasso accuses the White House of “cooking the books.” King counters by asserting that there are 6,563,000, which sounds like a remarkably accurate number. So, where did they come from? King tells us, beginning at 2:17 in the video that follows:

Those numbers don’t come from the White House. There’s a wonderful website, ACASignups.net — private website — by a guy named Charles Gaba, who’s collecting data from all across the country.

If you check out ACASignups.net, you learn (from the F.A.Q.) that its creator is a website developer in Michigan with no background in statistics. He further intimates that he is ideologically on the fence, though he concedes he is “active in the local Democratic party” and thinks that “Barack Obama has been a decent President as far as what used to be considered moderate Republican policies go.”

Even if you accept Gaba’s espoused neutrality, his source list (New York Times, Salon, New Republic, Americans Against the Tea Party) reads like a who’s who of liberal journalism, and his data are culled primarily from NHS, CMS, and to a lesser extent Kaiser Family Foundation (aka the administration).

Returning to the main theme, at around 6:10, Wallace asks Barrasso, who is a physician, about the wisdom of extending the sign-up deadline:

WALLACE: It may be messy, but if the point is to get more people coverage — health insurance  — why not let them have more time to sign up?

BARRASSO: Because it doesn’t deal with the actual issue of getting people care. People wanted health care reform so they could get the care they need from a doctor they choose at lower cost. And what we see is even those signing up are finding out — many of them are seeing higher premiums, can’t keep their doctor, can’t keep their hospital. In the state right next to Senator King’s, in New Hampshire, 10 of the 28 hospitals are excluded from all the exchanges in New Hampshire. In Senator King’s own state, the most popular individual market plan prior to this is not able to be sold any more because it didn’t meet the Obamacare standards…. What we’re seeing are politicians trying to save their political careers instead of focusing on patient care.

After a brief detour into the details of King and company’s proposed fixes, which Wallace notes, Harry Reid has said will never reach the Senate floor for a vote, King is given a chance to rebut Barrasso:

Which is precisely the problem with Obamacare, which — with all due respect to Senator King — does exist (sadly). It doesn’t replace insurance companies, which are still free market enterprises and, as such, motivated by the goal of generating profits. It does, however, constrain arbitrarily which insurers can compete for consumer dollars, which ultimately mucks up the system. It is for this reason that, according to an analysis released yesterday by the Manhattan Institute that premiums will increase on average by 41% in 49 states. It is also for this reason that, absent politics, a majority in both houses of the legislature would favor repeal. 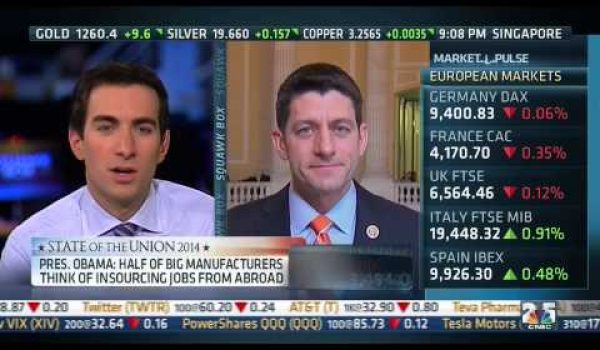