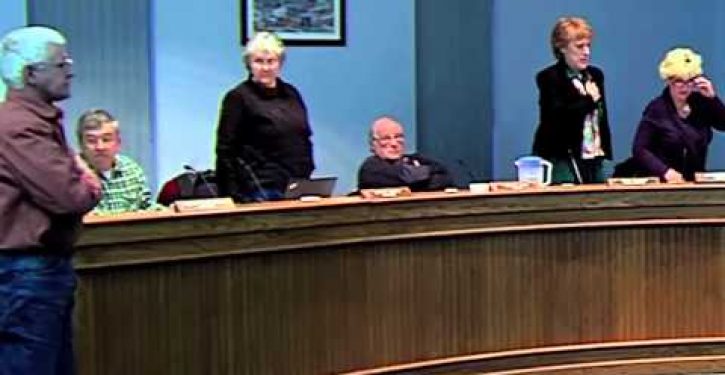 What would Shakespeare do? It’s not a question often asked, but in this case it is not only appropriate but answerable: He’d stay seated.

William Shakespeare is one of two members of the Hampden, Maine, city council who has refused to stand during the recitation of the Pledge of Allegiance for the last two months.

Shakespeare’s professed motivation, along with that of fellow councilman Thomas Brann, is not an absence of patriotism. Both claim believe, rather, that oath is being used meetings for political reasons, which they find inappropriate.

According to The Blaze, Shakespeare and Brann are military veterans. Brann, who served in Vietnam, is not registered with any political party and has been serving on the town council for the better part of 14 years.

[He] told TheBlaze he disagreed with Mayor Carol Duprey’s spoken introduction of the pledge, which she said was to pay tribute to those in uniform “currently serving in harm’s way.”

For Brann, “every single person supporting the Constitution” deserves honor and respect, not just those in combat — and it’s wrong for Duprey to leave others out.

Brann told TheBlaze he would stand for the pledge if Duprey’s “in harm’s way” qualifier was struck from her introduction: “For me that would be enough.”

Duprey told TheBlaze Thursday evening that at the Feb. 18 council meeting, which she didn’t attend, there was no introduction to the pledge or tribute regarding troops — just an announcement that the pledge would commence — and that neither Brann nor Shakespeare stood for the pledge.

Here is the video from that meeting, which confirms Duprey’s version of events.

Indeed, if anyone is injecting politics into the meaning of the pledge, it’s Brann, who told the Blaze that the recitation is part of a larger “Tea Party, extreme conservative Republican” agenda to take over the town.

There’s more to Brann’s story, including claims that a “cultish organization” called the Hampden Association of Landowners is out to seize land in the town with “total disregard for private property rights.” After a while, it begins to sound like a lot of crazy conspiracy theorizing.

It also appears ultimately that Brann and Shakespeare are simply channeling Barack Obama in the early days of his presidency, when he refused to place his hand over his heart during the singing of the National Anthem.

He has since adopted the habit of showing proper respect for America’s traditions, but if anything his false patriotism is even more cynical and galling. 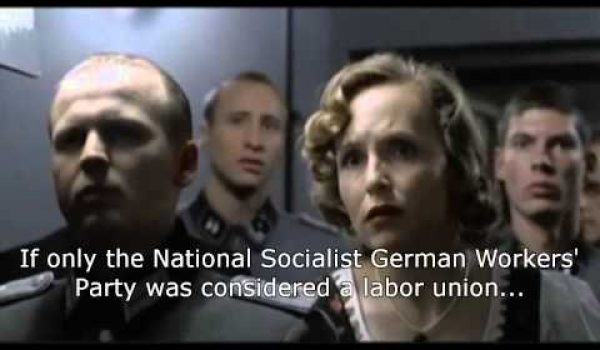