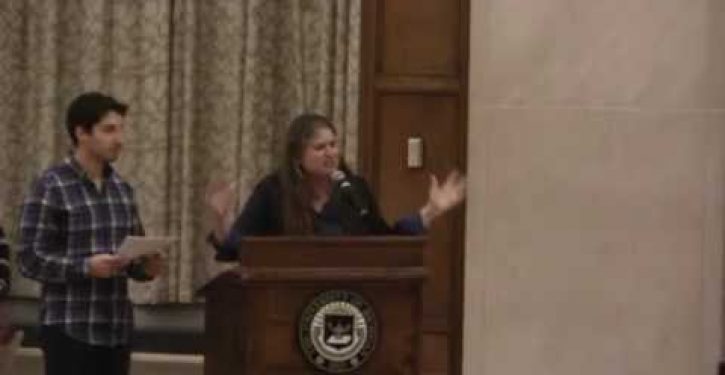 The BDS movement, which seeks to “boycott, divest and sanction” companies that do business in Israel, suffered a defeat at the University of Michigan recently where an anti-Israel BDS resolution failed at a student assembly vote, going down 25-9. It restores one’s faith in American college students that they resisted this hateful movement’s arguments.

William A. Jacobson has a great round-up of the six hours of presentations to the student assembly before the vote over at the Legal Insurrection blog. Well worth the time to review.

If you don’t have time to read all the stories and watch the videos of the presentations that were made before the vote, here’s one that is particularly good because the speaker is a professor whose specialty is human rights and who clearly has some issues with Israel but is unafraid to vigorously denounce the BDS movement. Professor Yael Aronoff (of Michigan State- James Madison College) argues that the BDS movement paints one side as a “righteous saint” and the other as a “monster devil” when she believes there are in reality “two peoples, the majority of whom have supported a two-state solution” over the years.

Professor Aronoff is especially good at turning the BDS argument on its head, pointing out that in the service of nondiscrimination…the BDS movement asks people to discriminate. Here’s an excerpt of her presentation, with video below.

5 ways to sell to Millennials: Why the GOP is failing
Next Post
Fireworks: Bill O’Reilly and race hustler Barbara Lee exchange barbs