If you’re a fan of California Congresswoman Barbara Lee and/or think she’s pure as the driven snow, forgive the reference in the title to her as a “race hustler.” In adding this attribute, I was merely seeking to complete the circle begun by an article at the Huffington Post titled “Bill O’Reilly Calls Rep. Barbara Lee A ‘Race Hustler.’”

The problem with the HuffPo piece, which trades on an interview Ryan gave two weeks ago in which he spoke of the “tailspin of culture in our inner cities,” is not just that Lee cast the first stone. Rather it is her tendency to see racism wherever she turns and Ryan’s of approaching the problems that contribute to poverty with intelligence and compassion.

To begin with Ryan, because his good works are more gratifying to talk about than Lee’s narrow and petty focus on race, consider his actions shortly after his failed vice presidential campaign in 2012. He began “quietly visiting inner-city neighborhoods … to talk to ex-convicts and recovering addicts about the means of their salvation.”

Ryan’s staff, meanwhile, has been trolling center-right think tanks and intellectuals for ideas to replace the “bureaucratic, top-down anti-poverty programs” that Ryan blames for “wrecking families and communities” since Lyndon B. Johnson declared a war on poverty in 1964.

Next year, for the 50th anniversary of that crusade, Ryan hopes to roll out an anti-poverty plan to rival his budgetary Roadmap for America’s Future in scope and ambition.

The above passage comes from an article that ran on Nov. 18 in the Washington Post, one of the newspapers that jumped on the bandwagon with other liberal news outlets to excoriate Ryan for his “dog whistle” comments.

Ryan in short has walked the walk while Lee has mainly talked the talk — and much of that talk is the usual race card patter. The day after Ryan’s “coded” comment, she released a statement in which she said:

My colleague Congressman Ryan’s comments about ‘inner city’ poverty are a thinly veiled racial attack and cannot be tolerated. Let’s be clear, when Mr. Ryan says ‘inner city,’ when he says, ‘culture,’ these are simply code words for what he really means: ‘black.’

But this is no different from her reaction in 2011 to a pro-life billboard in her congressional district. The point of the display was to highlight the fact that California currently leads the nation in abortions — a point that should resonate with black women, who are three times as likely to undergo the procedure. Lee, who subscribes to liberal Democrat playbook, was aghast at the billboards. But her complaint was not that the billboards denied women’s so-called “reproductive rights.” She saw them as racist, saying in a statement:

I am deeply offended by the race-based billboards that are being displayed in my congressional district by the Radiance Foundation and Issues4life.

Is Lee also deeply offended, or at least concerned, that 72% of black babies in the U.S. are born out of wedlock? If she is, she has yet to “release a statement” saying so.

She did release a statement in reaction to O’Reilly’s characterization of her as a race hustler. The HuffPo added it to their piece, if you’re interested, but be forewarned: It’s the same old same old. 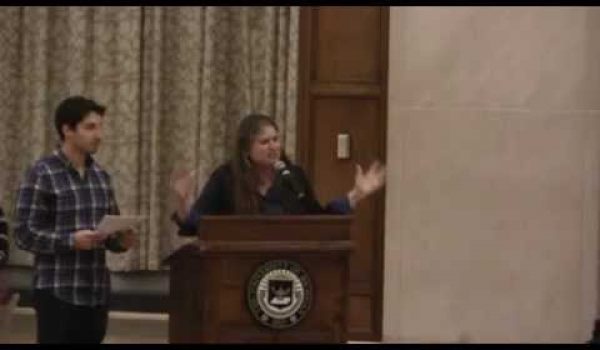 University of Michigan students do the right thing
Next Post
Video: At end of Obama Summit remarks, one person awkwardly slow-claps