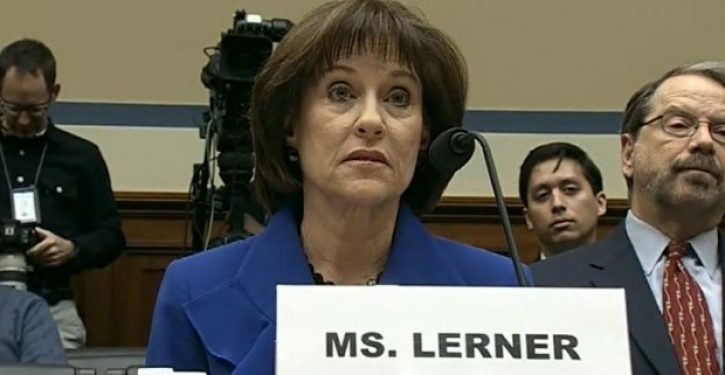 As reported at Liberty Unyielding, former head of the exempt organizations division of the IRS, Lois Lerner, was called again to testify at a  House Oversight committee hearing today, where she again invoked the Fifth Amendment.

Chairman Issa called Lerner back to testify last week, saying that her testimony “remains critical to the committee’s investigation” in a letter to her attorney William W. Taylor III. In the aftermath, she scrambled to come up with a deal with the lawmakers.

First, she asked for immunity, then she sought to avoid public hearings by opting for a closed door deposition, as reported at Fox News. In a must-see interview between Rep. Trey Gowdy and Bill Hemmer of Fox News, Gowdy connects the Citizens United Supreme Court ruling with the IRS targeting of conservatives.

The role of the Citizens United ruling cannot be overstated in it’s direct connection to the IRS scandal, as discussed at Liberty Unyielding.

“…You remember the State of the Union where the president famously chastised the Supreme Court for their decision in Citizens United? To their face at the State of the Union. Democrats don’t like that opinion and they immediately started a project and that’s not my word that’s her word….they started a project to unravel Citizens United because they were tired of outside groups going after Democrats. This was orchestrated, it was planned, and we’ll prove it tomorrow or whenever she testifies.”

An in-depth discussion on the history of the IRS targeting of conservative groups can be found at Tavern Keepers.

During the hearing today, Lerner clammed up again, proving that there may indeed be a bit more than a smidgen of  corruption in the targeting of conservative groups.

Before she had a chance to say anything, Issa displayed text from a telling email from Lerner: Lerner, who received “A bushel of Pinocchios” by the Washington Post’s Glenn Kessler shortly after her faux apology for the targeting of conservative groups in May of last year, stands to make as much as $3.96 million dollars during her retirement years as reported at the National Taxpayers Union.

Interestingly, Stephen Dinan of the Washington Times reported in September that Lerner retired after an “internal investigation found she was guilty of ‘neglect of duties’ and was going to call for her ouster, according to congressional staff.”

Rep. Cummings is not exactly a model of civility, as he also doubly victimized Catherine Engelbrecht, founder of True the Vote, at a hearing last month, where he strongly (and falsely) implied that her organization is racist, as reported at Liberty Unyielding.

Surprising admin 180: Home-schooling German family permitted to stay in U.S.
Next Post
Navy veteran to CT lawmakers: ‘I will not comply’ with gun control law