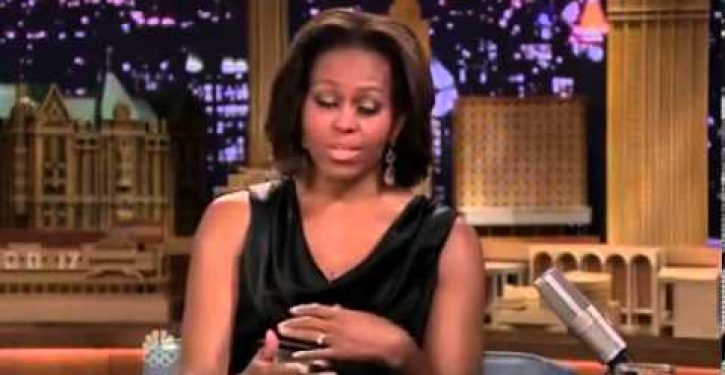 In case you missed it, First Lady Michelle Obama was a guest on the “Tonight Show” with new host Jimmy Fallon. Not one to stray far from her soapbox, Mrs. Obama brought along a supply of kale chips to snack on as an alternative to potato chips. “The best part,” she stated between bites, “is they are high in Omega-3 fatty acids.” That is true. Unfortunately, it is equally true that the chips are also high in fat. Even when baked using “healthy ingredients,” 60% of the snack’s calories coming from fat.

But her “Let’s Move!” campaign was not the only thing she was selling. She also extolled the virtues of Obamacare, especially for young people. In the video clip that follows, she tells Fallon:

[T]hanks to the Affordable Care Act, young people can stay on their parents’ insurance until they are 26. But once they hit 26 — they’re on their own. And a lot young people think they’re invincible. But the truth is, young people are knuckleheads. They’re the ones who are cookin’ for the first time and slice their finger open, they’re dancin’ on the bar stool.

Apparently, they’re not so knuckleheaded as to fall for a scam to sell them health insurance they don’t want or need. So far, less than a quarter of Obamacare enrollees are Millennials — a percentage that is far below what the government needs in order to avoid the dreaded death spiral.

At least the first lady didn’t make a complete fool of herself by urging people to drink more water.

A happiness map of the U.S.
Next Post
Conservative blog asks: ‘Are Democrats tyrants?’