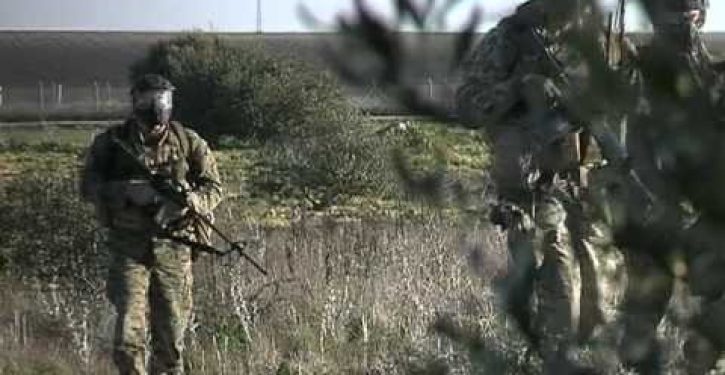 The map burst forth at the end of last week and quickly went viral.  It doesn’t show that the U.S. Navy had any assets that were capable of intervening in the Benghazi crisis, but of course it has excited much speculative commentary anyway.

Herewith a brief survey of what it shows.  (Map below.)

1.  No ship that is outside the Mediterranean Sea on this map was a candidate for responding to the Benghazi crisis.  That eliminates almost all the ships displayed.

Ships can’t “beam” from one body of water to another.  They have to move through the water.  Even if they move at an unusually high speed (say, 30 knots, or 30 nautical miles per hour, which is about 35 statute miles per hour), they can only go so far in a matter of hours.

Moreover, any ship on the east side of the Suez Canal would have to transit the Canal to get to the Libyan coast.  Ships don’t just go through the Canal whenever they want.  There are two convoys each day, one southbound and one northbound.  Ships wait at Port Suez (on the south side) or Port Said (on the north side) for the next convoy going their way.  The Egyptian Canal authorities prescribe the convoy speed and escort the convoys with security craft and tugs.  There’s no getting through the Canal quickly; it takes the time it takes, which is at least 8 hours (and usually more), depending on when a ship arrives before the start of the next convoy.

2.  The air wings on USS Enterprise (CVN-65) and USS Dwight D Eisenhower (CVN-69) might be considered potential response forces.  To mount a response using aircraft from these carriers would have required getting overflight permission from the countries between the carriers and Libya, and then staging the aircraft to bases near Benghazi.  It may be that the process was started to accomplish these goals.  (I doubt it.)  But even if it was, it was highly unlikely that arrangements could be made within the time the crisis was raging.  The Air Force F-16Cs at Aviano Air Base in Italy would have been the most appropriate fixed-wing (strike-fighter) response force.

3.  There were seven ships in the Med, of which one was USNS John Lenthall, a replenishment oiler (non-combatant) operated by the Military Sealift Command.  John Lenthall does not have the capabilities to respond to a crisis like the attack in Benghazi.  That leaves six combatant ships.

It’s possible that one or more was ordered to begin moving toward Benghazi during the crisis.  (We know that two were ordered to move toward Benghazi afterward.)  If the positions are accurate, none of the ships was close enough to mount a response with her embarked helicopter – the only capability that would have had some (limited) use in this particular crisis – without moving significantly closer to the Libyan coast.

The capabilities of the ships’ helicopters would not have been well suited to the problem.  The ideal close air support for urban ground combat from a sea services platform would have involved Marine Corps UH-1Y Hueys or AH-1Z (or the older W) Super Cobras.  (Carrier-based F/A-18s perform in the CAS role as well, along with carrier-based MH-60S helicopters, now being phased into the fleet.  None, as noted, were in the Med.)  The Marine Corps combat aviation helicopters are not routinely available in the European or African theater.  See more on Marine Corps assets below.

Two of the Navy destroyers on the map would have had SH-60B or MH-60R Seahawk helicopters, which are not well suited to the close air support mission – on land, in an urban environment – that was chiefly needed in the Benghazi attack.  The Navy SH- and MH-60s don’t have the optimal weaponry or the training for that mission.

In any case, none of the ships on the map was close enough to even deploy her helicopter – if she had one.  Taking them one by one, starting with the closest:

USS Laboon (DDG-58).  According to this site, Laboon (an Arleigh Burke destroyer, like all the destroyers on the September 2012 map) had entered port in Souda Bay, Crete on or just before 6 September.  However, Laboon is of less interest to us, because as a Flight 1 Arleigh Burke, she doesn’t deploy with a permanently embarked helicopter.  She can land and refuel helicopters, but doesn’t deploy with one.

Her other capabilities, which could potentially be deployed against a problem on land, include Tomahawk missiles and her 5-inch naval guns.  It would take an extended discussion to explain why these weapons were not suited to the problem in Benghazi; you can take my word for it, or ask questions and I’ll answer in the comments.

On 11 September, the map reflects Laboon still in port; we can assume she was pierside.  It would have taken her several hours to get underway, as a portion of her crew was probably ashore on liberty.  Each sailor ashore can be located and recalled, but that takes time.  A ship can leave some personnel behind to get underway for a combat mission, but would probably not want to leave the number that are likely to be ashore at any given time during a peacetime port visit.

Laboon was the closest ship, about 230 nautical miles (280 statute miles) from Benghazi.  If Laboon got underway, it would have taken, at a minimum, 12-13 hours from initial notification to get to the Libyan coast.  Getting that close would have been necessary for Laboon to use her naval guns, which might have been slightly more useful than Tomahawks (but still would have been poorly suited to the problem ashore).

USS Forrest Sherman (DDG-98).  Forrest Sherman is a newer destroyer with the ballistic missile defense (BMD) upgrade package, and was on BMD presence patrol in September 2012.  She was at least 450 nautical miles from Benghazi at the time the map was preserved on 11 September.  It would have taken her about 13 hours to get within useful helo operating range of Benghazi (I’m calling that, at the outside, 100 nautical miles, although ideally it would be closer.  If the helo was guaranteed the option of refueling in Libya, it could be further from shore).

From where she was, Forrest Sherman could not head on a straight line toward Benghazi, nor could she necessarily maintain top speed for the entire transit.  She might have to spend some time, perhaps an hour or two, initially, at a lower speed, maneuvering through the Greek islands.

USS Jason Dunham (DDG-109) and USS Cole (DDG-67).  These two destroyers were about 650 nautical miles from Benghazi.  It would have taken Jason Dunham a minimum of 19 hours to get within helo range of Benghazi from the time of notification.  Cole, like Laboon, is a Flight 1 Arleigh Burke and does not deploy with an embarked helo.

USS Mount Whitney (LCC-20).  This is the U.S. Sixth Fleet command ship.  Mount Whitney has typically had a detachment of two helicopters to deploy with (which are not physically on the ship while she’s in port); she spends a lot of her time in port in Gaeta, Italy, and was in port on 11 September 2012.  It would take her several hours to get underway from the time of notification, as she, like Laboon, would have to round up her crew (as well as fleet staff) – a number of whom live ashore.

Mount Whitney was 600 nautical miles from Benghazi.  She can’t make the 30 knots the destroyers can, if they have to.  If all systems are go, she can reasonably maintain maybe 21 knots.  If she could deploy in 4 hours with two SH- or MH-60 Seahawks, she could be 100 NM from Benghazi in 29-30 hours, following notification.  (She might not be able to deploy in 4 hours; it would depend, at a minimum, on her fuel state.  It takes awhile to fuel a big hunk of metal like Mount Whitney.)

USS McFaul (DDG-74).  McFaul is also a Flight 1 Arleigh Burke, and does not deploy with an embarked helicopter.  She was the furthest from Benghazi on 11 September 2012, about 1200 NM west near the Strait of Gibraltar.  (McFaul had departed Slovenia on the 6th.  She was forward-deployed that year from February to December of 2012.)

From where she was on the 11th, McFaul would have required a minimum of 40 hours to reach the coast off Benghazi.  Again, without a helo, her reach over land was restricted to Tomahawk missiles, which had no utility for the problem, and naval gunfire, which required her being immediately off the coast (and still wasn’t particularly useful).

4.  There were no seaborne Marines in the Med at the time.  The two Marine Corps “FAST platoons” – from the Fleet Antiterrorism Support Team – in Rota, Spain were ordered to prepare for deployment during the crisis.  One of the two platoons was conducting a joint NATO exercise at the time using CH-53 Sea Stallion helicopters to deliver Marines for the live operations drill, and presumably would have had those helos available for transport to a mission in Benghazi.  They would have had to stage through Sigonella, Sicily.  (I’m not sure if there is, or was, a Sea Stallion detachment permanently assigned to the FAST in Rota.)  Another delivery option would have been C-130 airlift.

There were also separate Marine Corps task forces in Sicily and Romania.  Neither of them had attached combat aviation units.

Moreover, the Marines of SPMAGTF* Africa (based in Sicily) are deployed in smaller units around Africa at any given time, and are not necessarily available to deploy from Sicily on short notice.  The exact disposition of the SPMAGTF in September 2012 can’t be fully reconstructed from the reporting at the time, but we do know that there were units deployed to Benin, Senegal, Uganda, and Djibouti.  These Marines do not, in any case, train to the specific antiterrorism combat mission as the FAST Marines do.

5.  This summary, which was prompted by the recently released Navy map, looks at Navy and Marine Corps assets only.

6.  Final point:  it bears reiterating that the failure in Benghazi was a failure to plan: for security, and for military support to what was unquestionably known to be a dangerous diplomatic mission.  There was every reason to engage in such planning, which would have required the State Department asking the military to plan support and keep it positioned, or quickly deployable.  The probable necessity was known about beforehand.  It just didn’t happen.