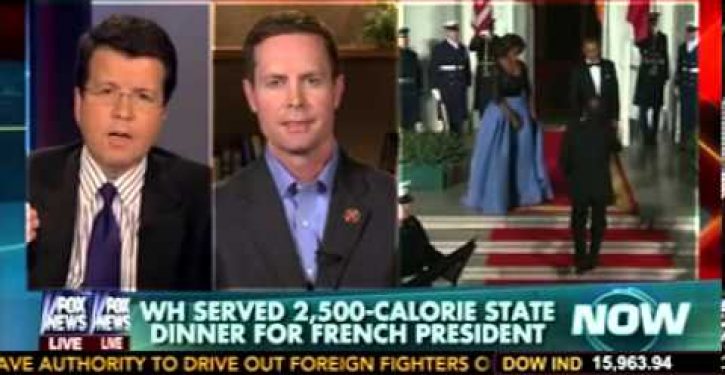 The high cost of White House official state dinners is a matter of public record. But apparently these lavish feasts aren’t excessive only in terms of their dollar count but their calorie count.

The Washington Times notes that the meal dinner served Tuesday night in honor of French president François Hollande was estimated to provide 2,500 calories — more than an entire day’s recommended caloric intake for all but the most active adults.

But Tuesday’s feast may belong to a dying breed. BizPacReview reports:

Davis’ bill, H.R. 3686, the School Nutrition Fairness Act, is “to make sure this Administration is aware of the real-life impact their regulations are having on kids who are going hungry and our smaller school districts who are struggling to keep up with the increased costs,” he wrote on FacebookTuesday.

Davis was a guest on Fox News’s “Hannity,” where he discussed his proposed bill. Noting that the recent dinner was “almost three times as much as what the first lady and the USDA allow our school kids to eat in the school lunch program,” Davis noted it’s “the height of hypocrisy.”

Then again, considering the opinion of students subjected to the first lady’s school lunch program, maybe that is what needs to be changed.