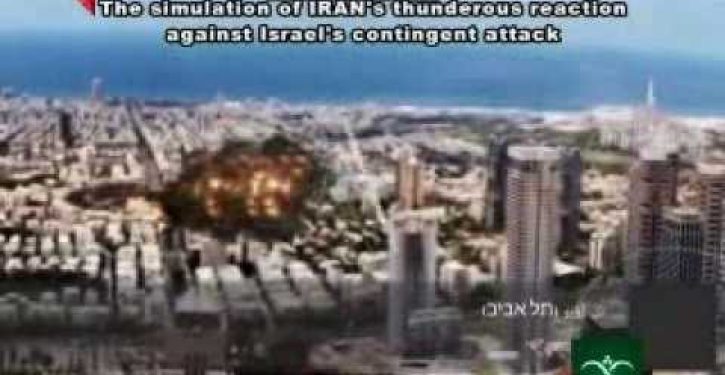 To read a full-length treatment of the latest Iranian trash talk, see this excellent summary from Times of Israel.  I’ll address the two major rhetorical jabs in turn.

First, the menacing announcement that Iran’s navy will put ships near U.S. “maritime borders,” and that “this move has a message.”  We were already aware that the ships were on the way: one frigate and a supply ship.  We know to watch for them by the southerly route around Africa, with an announced stop in an unnamed South African port.

Western media had basically stopped talking about them, however, because they’ve been off the radar.  The Iranians haven’t made announcements about where the ships are since they left Iran on 21 January, and if the media in East Africa know, they’re not talking.

The ships have presumably made refueling stops in African ports at least twice by now, and could have arrived in a South African port this past week.  From the Cape of Good Hope, it will take them another 12-14 days, depending on their speed and number of refueling stops, to make their way up the west coast of Africa.  If they stopped only to refuel in a South African port, they could be as much as halfway to Northwest Africa by now, where a final refueling stop could be made in one of several ports: Conakry (Guinea), Dakar (Senegal), Nouakchott (Mauritania), or even Praia (Cape Verde Islands).  The latter would give the Iranian ships the shortest Atlantic hop to Venezuela.

If the ships have been moving quickly, they could arrive in one of these ports – especially Conakry or Praia – as early as the 14th.  After that, it will take them right around a week to make the jump across the Atlantic to Venezuela.  That would put them in Caracas or Puerto Cabello (the latter is the main naval base, a little west of Caracas) as early as 21 February.  Arrival is more likely to be a few days later.

As for coming near U.S. maritime borders – well, they will be closer than Iranian warships have ever been in the Islamic revolutionary era.  (The Shah’s navy sent Iranian warships to visit U.S. ports back in the 1970s.)  The ships are likely to visit Cuba and conduct a naval exercise with the Cubans there, so we have that to look forward to.  It’s even possible that the frigate Sabalan will venture to the U.S. territorial waters limit (12 nautical miles) off of Florida.

But both of our nations know Sabalan can’t do more than take pictures and wave.  The supply ship Kharg is the one that could do something militarily interesting – but it won’t be off the U.S coast, and it won’t be a tactical naval action.  Kharg might deliver an arms cargo, such as Shahab missiles, to Venezuela (or even Nicaragua, or both).

It helps to appreciate what a major undertaking it is for a little frigate with no underway refueling capability to make this voyage.  A U.S. Navy frigate, in company with a replenishment oiler, can go all the way from Mayport, Florida to the Persian Gulf without having to stop and refuel in a port.  If necessary, the trip can be made in less than two weeks.  It’s rarely done this way, but it can be.  The Iranian navy, by contrast, literally does not have this capability.

And for the U.S. Navy, the frigate is the smallest and least capable of our escort combatants.  If an Arleigh Burke destroyer is an Olympic freestyle medalist, the Oliver Hazard Perry frigate is a top-seeded NCAA swimmer.  The Sabalan, in comparison, is currently dog-paddling around Africa – and will be on a short and unfamiliar, fuel-limited tether when she gets to the Caribbean.  A heroic moment for her will be having her picture taken with Key West on the horizon in the background.

We should take Iran seriously, but not because her navy poses a threat to North America.

Then there’s the wonderful video simulation of the Iranian attack on Israel, and on a U.S. carrier in the Persian Gulf (which is announced to be USS Abraham Lincoln, but more on that in a minute).  This video was apparently broadcast on Iranian state TV.  It’s hard to say which simulation is more humorous.

For one thing, the Iranian video shows a fleet of drones taking off to fly over Israel and launch missiles at Israeli targets (which for some reason are designated with Hebrew captions on the targeting display.  On the face of it, it looks to me like the makers of the Iranian video used a signal poached from an Israeli data-link.  Maybe someone out there can translate the Hebrew for us. ** UPDATE: Many thanks to reader G, who tells us the Hebrew captions are simple designations of generic Israeli targets, probably added to the old footage by the Iranian video makers, for the benefit of eventual Israeli viewers.**).

But if there’s one thing Israel can just keep shooting down over and over, it’s Iranian drones, which are subsonic and rudimentary.  Heck, Iran can shoot down Iranian drones, with probably at least an 80% success rate, if the air defense forces are properly alerted.  For Israel the success rate will be higher.  Iran doesn’t have enough drones to put Israel’s air defenses out of business.

This doesn’t mean there is no air threat to Israel.  It means the one depicted in the video is ridiculous.  What Israel will have to worry about is rockets and short-range missiles launched from Iran’s terrorist allies in southern Lebanon and Gaza, along with the one threat simulated in the video that is credible: medium-range ballistic missiles from Iran.

Israel’s Arrow anti-ballistic missile system is likely to do a good job against this last threat, especially if it’s bolstered by a U.S. Aegis warship off the coast.  This coordinated defense should be able to intercept most of the missiles in a barrage from Iran well before they enter Israeli air space.  But some percentage of the missiles would probably get through, perhaps two or three in ten.

That part, therefore, is not funny, even if the video simulation is farcical.  Assuming Israel retaliates, if Iran launches missiles at her, the Iranians aren’t likely to try (or be able) to get off more than one or two dozen medium-range missiles.  The payload these missiles carry is by no means negligible, but given the missiles’ relative inaccuracy, the number of them that would get through is not sufficient to do serious damage to Israel’s defense capabilities (as the video optimistically implies).  The concern – a grave one – would be the population.

And then there’s the simulation of an attack on the U.S. aircraft carrier in the Gulf (the set-up for which starts at the 7:20 mark in the video).  Humor-wise, this segment is what we call a target-rich environment.

First, the target is announced to be the USS Abraham Lincoln (CVN-72).  This is presumably because Lincoln is the carrier that was overflown by an Iranian surveillance aircraft in 2012.  Iran has video footage of her.

But at 7:52, the video starts showing footage of USS Carl Vinson (CVN-70).  The aircraft we see in the ensuing minute are from Vinson’s air wing, CVW-17, based on their markings.  The footage looks like stock video from the U.S. Navy, or possibly a media documentary.

The overhead shots of a carrier flight deck, which are seen before and after the glamour shots of Vinson, do appear to be of Lincoln.  They would have come from the overflight by the Iranian P-3 Orion in 2012.  David Cenicotti (The Aviationist) and David Axe did a very nice reconstruction of that event at War is Boring this past week, pointing out that the P-3 was performing a synoptic surveillance maneuver called an “eight-point rig,” which involves photographing the target from each of eight cardinal perspectives: quarters, beams, bow, and stern.

And sure enough – O-M-G, this is funny – at 8:50 in the video, we see the overhead camera start flashing as it snaps still photos of the carrier below.  This bit of the Iranian video is interwoven with segments meant to indicate that mobile missiles are being moved into position along the coast.  An Iranian voice warns the carrier, in English, to leave the area.  The implication seems to be that the Iranian aircraft will provide target cueing to the missile battery (apparently by snapping pictures).  Assorted missile launches ensue.

At the 9:35 mark, the carrier footage switches back to Carl Vinson, with an F/A-18C Hornet from VFA-113 visible taxiing on the flight deck at 9:36.  At 9:45, things get snot-spewingly uproarious as simulated “missiles” (or something; more than one of them looks suspiciously like a drone) start hitting the carrier – and then hitting aircraft in flight.  This last premise is so side-splittingly off the mark – as if the missiles supposedly launched from shore are going to hit helicopters or fighter jets at low altitudes in flight – it’s hard to know where to start with the derision.

We could keep going, but you get the picture.  There’s a danger in laughing too hard; Iran can pose a credible threat to U.S. Navy ships, including our carriers, especially with submarines and mines.  We no longer have the overwhelming preponderance of force in the Persian Gulf to make it completely unprofitable for Iran to try something against us.

The Iranians could, in fact, take one of our carriers out of action: using a couple of their small Ghadir-class submarines to nail it at the keel, with four torpedoes into the propulsion-shaft housing down by the screws, is how I’d do it, although that would probably be a suicide mission.  (If the Ghadirs got through to the carrier, the carrier’s escort would go after them immediately, once it detected the first torpedo.)   If they succeeded, at any rate, the only way for us to replace that carrier quickly would be to leave the Far East without one.

It’s a real problem for our credibility.  We don’t have the forces in the Gulf today to mount a strike of useful scope on Iran, nor could we simply suppress any Iranian reaction with little inconvenience to ourselves.

Even if there were such a dynamic as radical regimes maturing into respectability through nuclearization, Iran’s isn’t the one that’s going to happen for.  Best for everyone if the mullahs don’t get a crack at the bomb.