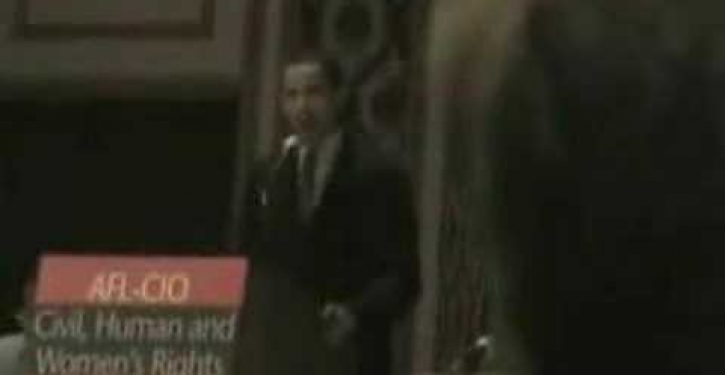 President Obama is not exactly known for being consistent on issues. Some of his more egregious statements are pretty well known, such as his stated position in 2003 on nationalizing health care, for example:

Other oft-quoted creepy quotes include his statement on a “civilian national security force,” (By the way, did you know that this quote was “off-script”? He actually deviated from his speech on that one):

Or how about his whispered statement to Russian President Dmitry Medvedev on his “flexibility after the election.”

But there are some that you may not remember.

Liberty Unyielding is here to remind you:

“When we run our budget into red ink for things that we want instead of things that we need, we’re indicating that we’re not yet full-grown.” Barack Obama, June 2006

“But I don’t think we are going to be able to eliminate employer coverage immediately, there’s going to be potentially some transition process. I can envision a decade out, or 15 years out, or 20 years out.” – Barack Obama at SEIU Health Care Forum,  March, 2007

“I was a constitutional law professor, which means unlike the current president I actually respect the Constitution,” Obama told an audience at a campaign fundraiser. “I believe in an attorney general who is actually the people’s lawyer, not the president’s lawyer.” – Barack Obama on George Bush, 2007

“We are at the same levels of violence now that we were back in June of 2006.” Barack Obama on Troop Surge in Iraq in 2007

“As a general principle, I believe that the Constitution confers an individual right to bear arms. But just because you have an individual right does not mean that the state or local government can’t constrain the exercise of that right, in the same way that we have a right to private property but local governments can establish zoning ordinances that determine how you can use it.”  – Barack Obama, April 2008

“What I said was, I would look at raising the capital gains tax for purposes of fairness.” – Barack Obama, April 2008 (Reminds me of this)

“And you don’t increase spending, unless you’re eliminating some spending or you’re finding some new revenue. That’s how we got an additional $4 trillion worth of debt under George Bush. That is helping to undermine our economy. And it’s going to change when I’m president of the United States.”  – Barack Obama, April 2008

“…no one’s more mindful than me of the fact that we can’t have a bill that simply blows up an additional entitlement that’s not paid for…Congress needs to know that when I say this has to be deficit neutral, I mean it.” Obama on Affordable Care Act, 2009

Watch this video for more….

Some statements made by Democrats about high gas prices under George W. Bush:

Death by Nehi: Parents forced 5-year-old daughter to drink so much soda she ODed
Next Post
Starbucks for Dummies