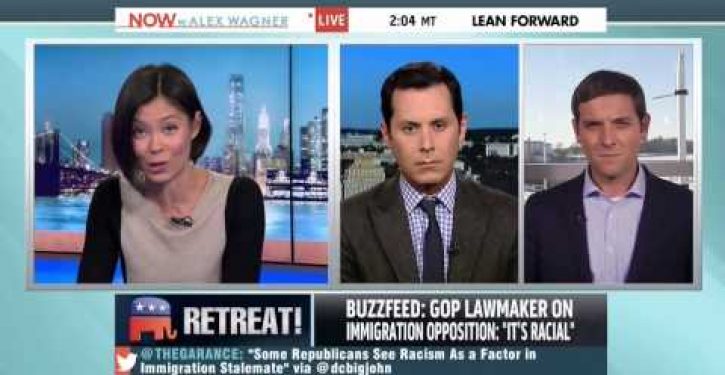 “Hi. My name is _____, and I have a problem.” That’s more of less the format whereby first-timers at meetings of Alcoholics Anonymous begin their 12-step journey to — they hope — recovery. Inserting “MSNBC” in the above blank seems curious, but then the cable “news” network suffers from a unique addiction. There is no official name for the affliction in the literature, but that is because no other television network  in history has been unable to go for a period of 24 hours without accusing a political party of racial bias.

For those who missed the back story yesterday, some moron at MSNBC created a stir when he tweeted:

Maybe the rightwing will hate it, but everyone else will go awww: the adorable new #Cheerios ad w/ biracial family.

The network sprung into damage control mode. The tweet was abruptly scrubbed and just as abruptly supplanted by a tweet that read:

Earlier, this account tweeted an offensive line about the new Cheerios ad. We deeply regret it. It does not reflect the position of msnbc.

And that was only the beginning. Said ignoramus was given his pink slip, and the network’s president, Phil Griffin, promptly delivered an apology to RNC Chairman Reince Priebus, who had threatened a boycott of the network:

The tweet last night was outrageous and unacceptable. We immediately acknowledged that it was offensive and wrong, apologized, and deleted it. We have dismissed the person responsible for the tweet.

I personally apologize to Mr. Priebus and to everyone offended. At MSNBC we believe in passionate, strong debate about the issues and we invite voices from all sides to participate. That will never change.

So how contrite was Griffin? A more important question was “How much weight does he carry among the on-air ‘talent’ at his network?”

Feel free to judge for yourself. Below is a clip of MSNBC host Alex Wagner (h/t Weasel Zippers) enlarging on the topic of comprehensive immigration reform. A transcript of her remarks follows.

As John Stanton reports, according to one southern Republican lawmaker, the reason the party has had such a hard time doing anything on immigration reform is because “it’s racial. If you go to town halls, people say things like ‘these people have a different culture than we do’, and that’s code for race.”

Sam Stein, one would hope we have moved past the question of alligator-filled moats but it is a fair point that John Stanton brought up that what’s driving division over immigration reform is the base itself, which makes tackling it that much harder. John Boehner came out and excoriated outside groups over the last spending bill in the fall… and seemed to maybe be putting those demons in a box. But this is very much the heart and soul of the Republican party, this argument. [Emphasis added]

The Huffington Post was not involved in the kerfuffle, but somehow managed to insinuate itself in it by airing this fairly idiotic take on the situation on its video channel. Consider it bonus footage: