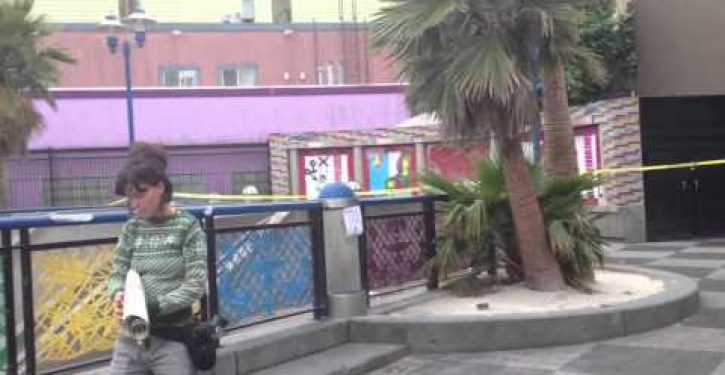 Tom Perkins, a prominent venture capitalist, called out the “eat the rich” mentality in a letter to the Wall Street Journal titled “Progressive Kristallnacht Coming?”

It is unlikely that many progressives got past the title, and that is a shame. Tom Perkins is right for calling out class warfare.

Perkins cited the Occupy movement, the “demonization of the rich embedded in virtually every word” of the San Francisco Chronicle, and the “outraged public reaction to the Google buses” that transport “technology workers from the city to the peninsula high-tech companies which employ them.”

Google buses? People freak out over buses that transport workers?

Evidently, some in San Francisco really do hate the Google buses.

Here is a video of people beating up a Google Bus pinata:

Caille Millner of the San Francisco Chronicle is not too keen on what she describes as the,

“scourge of buses parading our streets, blocking our municipal bus stops, mocking everyone who didn’t work at Google by flaunting how great it was to work at a company that offered you a coddled commuting experience with free Wi-Fi.”

There is no doubt that class warfare in America has reached an unhealthy level. It reeks of envy and the people that buy into it are likely influenced by the rhetoric coming squarely from the Obama administration about “millionaires and billionaires.” White House Press Secretary Jay Carney has evoked the phrase ad nauseum, usually coupled with chiding calls to Congress to raise taxes.

In just this one press briefing, he used the term eight times. He has also mentioned it here and here.

The bad news is that since Obama took office, those who believe that there is a “strong” or very “strong conflict” between the rich and the poor has gone up from 47% of adults in 2009 to 58%, according to a Pew Survey released this month. The good news is that last year, that same number was at 66%, which means less people are drinking the Koolaid.

Instead of considering Perkins’ well-founded fears, the mainstream media has chosen to attack him, obfuscating the issue by harping on his comparison of the government-sponsored class war in America to Kristallnacht.

Perkins is correct to call out this injustice.

Disregarding the irony, many media outlets also took the occasion to make it very clear that Tom Perkins is a one percenter.

The San Francisco Chronicle, duly offended, put Perkins on their front page and… asked Google for some “actual money.”

The author wrote in part,

“By implying that there’s a ‘rising tide of hatred of the successful one percent,’ he’s [Perkins] reinforced the perception of the wealthy as clueless and entitled…” The author continues, “What the tech companies really need to do is make tangible civic efforts, right here in the city. It’s swell that Google is working on bringing Wi-Fi to Third World countries with high-altitude balloons, but what is it doing right here in its own backyard? Some thoughts on affordable housing — and yes, some actual money — is what is needed.”

“And there are a number of other plutocrats who manage to keep Hitler out of their remarks but who nonetheless hold, and loudly express, political and economic views that combine paranoia and megalomania in equal measure.”

Here are some of the more ridiculous headlines:

In Perkins’ letter to the WSJ, he wrote in part,

“This is a very dangerous drift in our American thinking [class warfare rhetoric]. Kristallnacht was unthinkable in 1930; is its descendant ‘progressive’ radicalism unthinkable now?”

An honest question to those who believe that wealthy people are somehow hoarding money that would otherwise be used to buy poor children blankets: Have you ever purchased a lottery ticket? If you became rich, would you vilify yourself? How would you respond if people bashed you without knowing who you are as an individual?