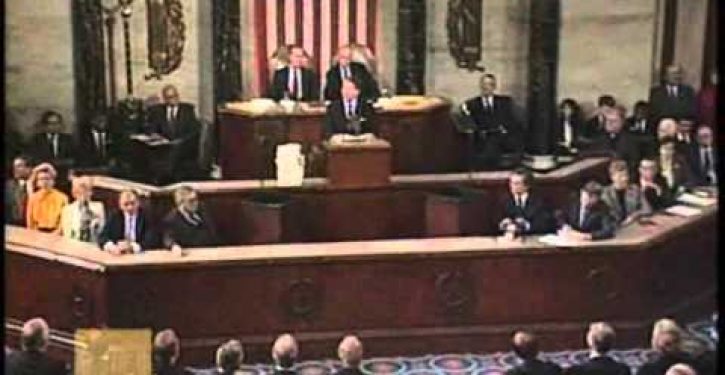 Tonight’s State of the Union message may be Vice President Joe Biden’s best opportunity in 2014 to enjoy a gentle snooze, but here at Liberty Unyielding, the hits will just keep on coming.  The 2014 SOTU will be our first officially live-blogged event, and we’re darn proud to announce it.

For those who would like to study up on their drinking-game ideas, Howard Portnoy has helpfully posted the suggestions of Generation Opportunity.  Your preferences may vary; please feel free to share.

For your added enjoyment in the interim, a video excerpt from the SOTU of January 1988 is posted below.  Watch for the 1:40 mark, and Reagan’s one-liner from Lao Tzu.

Meet me here at 8:45 PM EST for the mic test.  It is possible to get through an Obama SOTU with zest, bonhomie, and a minimum of excruciating pain.  We’ll show ‘em how it’s done.

And the updates begin…  Willie Robertson of Duck Dynasty will attend the SOTU tonight as the guest of Rep. Vance McAllister (R/LA-5).  This is probably the biggest news there will be all day about the SOTU, far outstripping, for New Hotness, Michelle Obama’s Old-n-Busted selection of Gay Basketball Player Jason Collins as one of her guests.

Mr. Robertson can be seen here demonstrating the qualities of a redneck gentleman.

Tap tap… is this thing on?

Getting the typing fingers revved up…

Gratified that O’Reilly is over with.

Will, Powers, Hill, Krauthammer – the panel on Fox.

Will: “He’s going to be pugnacious.”  If that isn’t a drinking cue, it ought to be.

Hate to say it, because it sounds cheesy, but there’s just no one admirable in the Obama cabinet.

Cruz with Graham and McCain.  Hey, Cruz is the tallest!

I’m with George Will.  What strikes you about these nights? “How ghastly they are.”

Does the clapping sound languid and tepid in there?  Just asking.

Manchin and Kirk sittin’ in a tree…. Heard there wouldn’t be so many of those ostentatious bipartisan couples this time.

Well, could this opening be any more precious?  Not sure people will resonate to annoying rhetorical devices.

O-ho.  So suddenly, we built that?? “Here are the results of YOUR efforts.”

“Better positioned for the 21st century than any other nation on earth.”  With the smallest work force since 1982.

Tired drive-by allegation against Republicans — everybody do a shot!

Biden always looks like he’s about to snicker into his hand.

“America does not stand still and neither will I!”  Utterly vacuous.

Boy, that was perfunctory (stand-up for FLOTUS.  Lasted a good second and a half.)

Partnering with local leaders on “issues from homelessness to marriage equality”?  Just threw THAT one in.

“Streamline the permitting process for key projects” – read, help out my cronies.

Anyone follow whatever Obama was proposing to make sure goods are stamped “Made in the USA”?  That didn’t make sense, whatever it was.  And now:  government-funded research is necessary for the next smart phone or Google?

Fuels of the future… reduce energy we consume… set new standards for our trucks (didn’t we already do that?)…

“US has reduced total carbon pollution more than any other nation on earth.”  And yet, here we are with drought in the West and Polar Vortex.  Maybe there’s no causal link?

Absolutely nothing memorable or actionable in this speech.

Everybody see Manchin there?  He couldn’t decide whether to get up and applaud or not.

“I shook down Apple and the internet providers to pay for broadband for the schools!”

Drink!  Obama White House practically only place left on the planet where women only earn 77 cents to a man’s dollar.

Having another “Gee, this is mindless claptrap” moment.

So, I could just fill in the blanks here with the rest of the agenda and go have some chocolate.  Drink!  Minimum wage!

OK, we’ve been on minimum wage for three minutes here.  Would be better with a routine by the Laker Girls

Pump up the Earned Income Tax Credit for single workers without kids?????

…and the inevitable: encouraging people to buy savings bonds.  If there’s something more bland, innocuous, and pointless, I don’t know what it is.

Drink, and just keep drinking.  Amanda “got covered,” and then she felt a sharp pain.  I don’t think that sequence was intentional.  Are LOL moments shot-worthy too?

No, you can’t be dropped for a pre-existing condition.  You CAN be dropped just for the hell of it.  Or lose your insurance, your doctor, and your hospital.

Utterly juvenile, partisan, irresponsible attitude seated upon the chief executive as he mocks Republicans on Obamacare.

“Help someone get covered”?  How, exactly?  Oh – badger the kids, help Mom with the application.  Great.  And who cares about the 600,000 people in California who lost their coverage and now don’t have insurance?

I admit, I’ve never felt as divorced from this chamber as I do tonight, watching it clap and cheer for the military.

Famous last words on Afghanistan.  I predict here and now:  we will NOT leave a unified Afghanistan behind, unless it’s unified by the Taliban.

Mali????? Boy, that came out of nowhere.  I bet fewer than 100 Americans have any idea why Obama said “Mali” just now. But what the hell.  Drink!

What is he ranting about now?  “Large scale deployments that drain our strength?”  Is that on the table for anything right now?  “America must move off a permanent war footing.”  Huh?  WTF?

Can we declare victory and go home now?

OK, he didn’t ACTUALLY say “Trust, but verify.”  But he shoehorned in both words.  Plus bonus references to JFK and Reagan.  Drink!

Obama never sounds mature and temperate when he talks about anything.  He just sounds practiced and impatient.

My goodness, this is awful.

Ideas we stand for, burdens we bear… here it comes… hire vets!  Mental health care for vets!  Have we mentioned that vets need mental health care? And they’re probably gay too…

But that’s not why they need mental health care.

Oh, what the hell, just drink.

(I think Michelle is speaking for all of us with that lowered-brow grimace.)

Sadly, POTUS is just not believable, saying these things it is so obvious he doesn’t really stand for himself.

Feet planted firmly today but eyes cast toward tomorrow, we can… do something.  Keep dropping more people from health insurance?

Bret Baier says there were 85 interruptions for applause.  Glad someone was awake and sober to count.

Futuristic chastity bra: Unhooks only for ‘true love’
Next Post
In the wake of Tom Perkins’ comments, a brief history of Kristallnacht