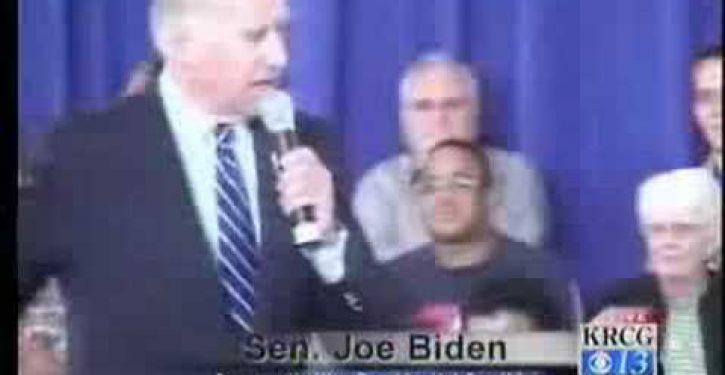 Texas state senator and rising Democratic star Wendy Davis has admitted to having embellished the facts in her personal history. Yesterday, less than a week after poking holes in her inspiring, up-from-nowhere narrative, the Dallas Morning News reasserted its liberal mala fides by publishing an editorial titled “The Wendy Davis story.” In it the editors wrote:

The bare-bones Wendy Davis story — the one without embellishment — is sufficiently inspiring as a matrix for defying expectations. The daughter of a teenage mother and a teenage mother herself, Davis managed to beat the odds by getting a college education and Ivy League law degree, then launching a political career that’s brought her national adulation.

But the die has been cast. The paper can’t walk back its earlier report that Davis was not a divorced working mother living in a mobile home at age 19. Rather, she was 21. The time she spent living in a trailer, moreover, was brief — a hiatus between the end of her marriage and her life as a single mother, living in her own apartment. In addition, the lawyer she married three years later financed her final two years at Harvard law school.

So, apart from what Davis calls the “fuzzy facts in her bio,” is any of this important? No less respected a journalist than Michael Barone thinks so. In an article at the Washington Examiner, he takes Politico to task for going easier on Davis than Chris Christie.

It is clear that Davis stretched the truth, and it is equally clear that commentators on the left are going to great pains to counter the attacks from their right flank. But how much can we really impute to details such as her exaggeration about her age at the time of her first divorce? To attempt to make a federal case out of her claim that she was 19 instead of 21 is to grasp at straws.

If there is a story here at all, it is in a statement that Davis herself released:

We’re not surprised by Greg Abbott’s [her opponent for the governorship of Texas] campaign attacks on the personal story of my life as a single mother who worked hard to get ahead. But they won’t work, because my story is the story of millions of Texas women who know the strength it takes when you’re young, alone and a mother. I’ve always been open about my life not because my story is unique, but because it isn’t.

The truth is that at age 19, I was a teenage mother living alone with my daughter in a trailer and struggling to keep us afloat on my way to a divorce. And I knew then that I was going to have to work my way up and out of that life if I was going to give my daughter a better life and a better future and that’s what I’ve done. I am proud of where I came from and I am proud of what I’ve been able to achieve through hard work and perseverance. And I guarantee you that anyone who tries to say otherwise hasn’t walked a day in my shoes.

What is significant first and foremost is that she repeats the lies about her age and living in a trailer. It’s bad enough for a politician to be caught with his hand in the cookie jar. But when he goes back for seconds, he demonstrates a dangerous level of hubris.

There is also the minor but telling detail of her use of the infelicitous figure of speech walk in my shoes in an accusatory statement addressed at Greg Abbott, who happens to be a paraplegic, confined to a wheelchair. When Joe Biden, made a similar gaffe (see video), he wrote it off by stating, “As you can see I’m new.” What will Davis’s excuse be?

Richard Sherman: ‘I don’t want to be a villain’
Next Post
Property-rights battle heating up in Virginia legislature