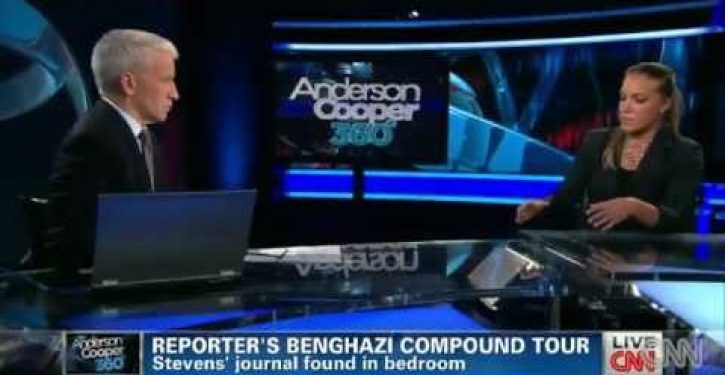 For those who can tear themselves away from reporting on Chris Christie’s “Bridgegate,” most of the discussion surrounding the newly released Senate Intelligence Committee report on Benghazi is surrounding the fact that the terror attack was painfully preventable.

But reading the report, as J.E. Dyer noted at Liberty Unyielding,

” is to come away with a sense, not of conclusions, but of unfinished business.”

On Sept. 11 2012, Ambassador to Libya Chris Stevens, computer expert Sean Smith and former Navy Seals Tyrone Woods and Glen Doherty perished at the hands of monsters who still have not been brought to justice, but seem to have been interviewed by every journalist on the planet. In fact, it seems that the radical Islamists continue to wreak havoc on the people in Benghazi.

One particularly troubling revelation from the Senate report:

“as many as” fifteen friendly Libyans “supporting the investigation or otherwise helpful to the United States have been killed in Benghazi since the attacks…” (p.41)

Were they killed because they were helping the United States? Were they not properly protected? Where is the discussion on this injustice? And how does this revelation impact the people in Libya?

Why were the U.S. facilities in Benghazi left unsecured?

The facilities in Benghazi after the attack were not secured for weeks.

Journalists and curious residents trampled all over the scene of the murders in the wake of the attack, removing items, including a safe, and undoubtedly contaminated evidence.

Notably, the official “cause of death” for  has never been revealed for Ambassador Stevens or Sean Smith, who were both secured initially the “safe haven,” as discussed during testimony by Deputy Assistant Secretary of State Charlene Lamb, who was “responsible for the safety and security of more than 275 diplomatic facilities” and one of the witnesses who appeared to be forthright about the events of that fateful evening.

The Senate Report notes that Sean Smith was found “deceased,” (p.54) but does not elaborate.

A CNN journalist who was in Benghazi three days after the attack was able to remove a journal (see a discussion of the journal’s contents at the Examiner) that belonged to Ambassador Stevens, and made some troubling, but little discussed revelations that can be seen here:

Why did it take so long for a proper investigation to start? This clear violation of evidence and surely, protocol, has not been properly discussed in the mainstream media.

However, CNN National Security Analyst Fran Townsend stated that the FBI took so long to get to the scene, outrageously due in part, to “infighting.”

“They had difficulty, and we understand there was some bureaucratic infighting between the FBI and Justice Department on the one hand, and the State Department on the other, and so it took them longer than they would have liked to get into country.”

It is difficult to select just one question to address, as there are still so many, some discussed at the Examiner, including the question of the evacuees.

Where are the Benghazi Survivors?

It should be noted that the Senate report redacts the specific number of  personnel at the “CIA Annex.” (p.19)

In addition to the Senate report,  “a series of recently declassified transcripts of briefings” on the Benghazi attack can be found at the Armed Services Committee website. The briefings revealed another little-discussed violation of protocol: an “after action” report was never created, contrary to standard practice.

The actions taken by the federal government before, during and after the attack reek of a disproportionate obsession with politics. As stated by Obama’s deputy campaign manager, Stephanie Cutter in the wake of the attack, Benghazi “is only an issue because Mitt Romney and Paul Ryan are making it one.”

Other offensive statements diminishing Benghazi are compiled at Tavern Keepers.