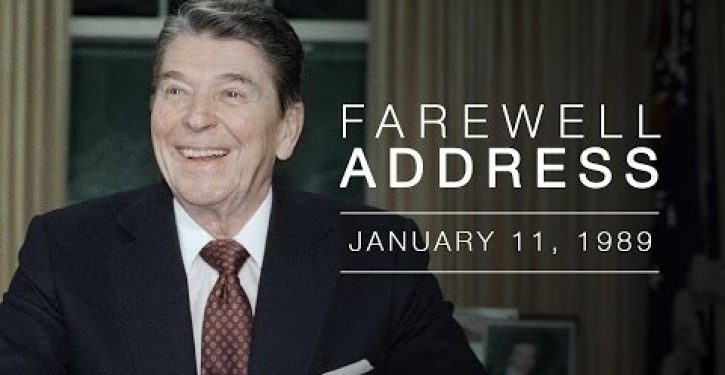 A third of a century ago, an old B-movie actor, radical right-wing conservative, tea party-like Republican was appointed Chief Executive of the United States after We the People fired a failed Democrat President who bequeathed him double-digit inflation, interest rates and unemployment; hostages in Iran; a hollowed-out military; and an ascendant Soviet Union.

Twenty-Five years ago today, after a 1984 Morning-in-America re-election and eight years of Reaganomics and peace-through-strength; a soon-to-depart-President Ronald Reagan was able to boast of conservative policy results:

And how stands the city on this winter night? More prosperous, more secure, and happier than it was 8 years ago. But more than that: After 200 years, two centuries, she still stands strong and true on the granite ridge, and her glow has held steady no matter what storm. And she’s still a beacon, still a magnet for all who must have freedom, for all the pilgrims from all the lost places who are hurtling through the darkness, toward home.

We’ve done our part. And as I walk off into the city streets, a final word to the men and women of the Reagan revolution, the men and women across America who for 8 years did the work that brought America back. My friends: We did it. We weren’t just marking time. We made a difference. We made the city stronger, we made the city freer, and we left her in good hands. All in all, not bad, not bad at all.

Read it all here, video below:

There is no mystery as to what policies produce peace and prosperity. It works every time it’s tried.

Sadly, it hasn’t been tried very often even by the GOP inheritors of the Reagan legacy that killed inflation and restored a roaring economy with less government regulation and taxation; and that liberated half the Earth from Communist tyranny thus relieving U.S. taxpayers of the burden of more decades of an expensive Cold War.

Yes, all in all, not bad. If We the People wish to again restore the City on a Hill, we must re-educate the voters that are somehow ignorant of the contrast between the Carter economy and Reagan’s 25-year recovery; and how much alike are Obama’s Democratic Party policies to those that wrecked us in the late 1970s.