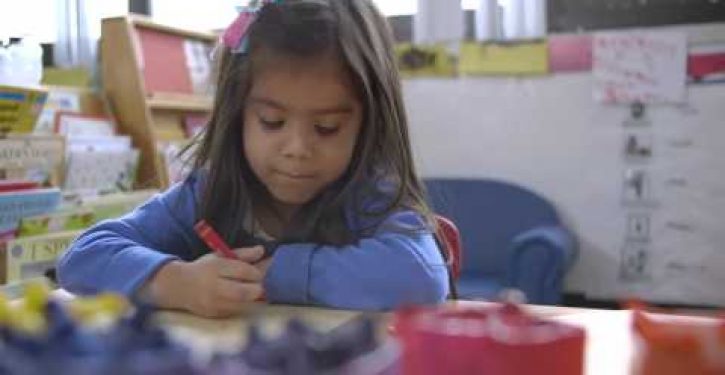 Mayor-elect Bill de Blasio has been actively touting his plan to expand after-school programs and to provide universal pre-kindergarten to the children living in New York City, as reported this week at Fox News Latino. To fund the expansion, de Blasio plans on taxing the wealthy.

But what is the plan? Where is the curriculum and who designed it? What is it, exactly, that “the wealthy” are to be funding?

Reverend Al Sharpton is one of the many leaders pushing de Blasio’s plan. In a press release from Citizen’s Committee for Children earlier this month, Sharpton said in part,

“A small tax on the wealthiest New Yorkers is a fair way to pay for such an important investment. New York must pass Mayor-­Elect de Blasio’s plan to expand universal pre‐kindergarten and after-­‐school programs: it is the best way to reduce inequality in New York City.”

A “grassroots” initiative (read: astroturf) has even been formed to push the plan, with a website found at UPKNYC. The massive “grassroots” effort even has its own Facebook page, with a less-than-impressive 198 followers at the time of this writing. They also have a Twitter account.

“Whatever we can do to be supportive of the Mayor-elect’s efforts there [to fund universal pre-K], we want to try and do it.”

De Blasio and his progressive allies have all heartily endorsed a universal pre-K for New Yorkers, as well as an after-school program that is “adding new programs between 3pm and 6pm in academics, culture and athletics,” according to UPKNYC, but what exactly is the curriculum?

Check out the list of leaders from business, civil rights, academia, advocacy & the arts who support this campaign: http://t.co/1rStThs405

“We will ask the very wealthy to pay a little more in taxes so that we can offer…universal Pre-K.” –@deBlasioNYC http://t.co/S8d2RFYcBG.

RT if you’ve committed to support my plan to fund universal pre-K and expand after-school programs in NYC.

Despite liberal optimism, 3 in 5 uninsured Americans still give Obamacare thumbs down
Next Post
Missiles for Hezbollah; a dilemma for U.S., Saudis, Israel?