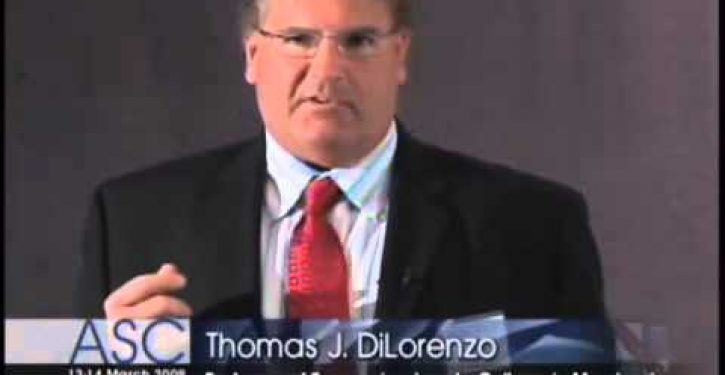 The year 2013 marked the 100th anniversary of two ignominious events in America: the imposition of a permanent federal income tax and the creation of the Federal Reserve Board.

Thomas Jefferson — Virginia’s second governor in the post-colonial era and the nation’s third president — opposed both actions on constitutional grounds. He prevailed, as long as he lived.

But others since 1913 (and even before Jefferson’s death in 1826) were hell-bent on confiscating private property, inflating the dollar, and diminishing liberties to enrich cronies through aggrandizement of the central government.

Barack Obama, along with the statewide slate of Virginia Democrats elected in 2013, purports to serve the “common good.” It was a favorite phrase of the mercantilist Hamilton, who twisted the “general welfare,” “commerce” and “supremacy” clauses in the Constitution to open a gigantic can of mischief.

(Ironic aside: Republicans hold annual dinners to honor Abraham Lincoln, a Whiggish Hamiltonian who promoted all of the above; Democrats dedicate a day for Jefferson and Andrew Jackson, who definitely did not.)

Jefferson wasn’t the only Virginian who predicted Hamilton’s Big Government fetish would metastasize. James Madison, who succeeded Jefferson in the White House, also embraced the axiom that government which governs least — and is closest to the people — governs best.

Such quaint constitutionalism was obliterated in 1913.

Passage of the 16th Amendment permanently enshrined the federal income tax, giving rise to what Loyola (Md.) College economist Thomas DiLorenzo calls “the invasive tyranny” of the Internal Revenue Service. Writing in “Hamilton’s Curse” DiLorenzo observes that the income tax “was the final nail in the coffin of federalism in America.” Federalism, properly understood, balances state and national authority, with the federal government exercising only those duties expressly delegated by the states.

To secure the coffin, the Federal Reserve also was founded in 1913. Another Hamilton dream come true.

The financial elites … were responsible for putting through the Federal Reserve System, as a governmentally created and sanctioned cartel device to enable the nation’s banks to inflate the money supply.

Instead of bringing economic stability, the Fed, whose chairman is appointed by the president, has presided over, if not spawned, America’s biggest financial crises.

Yet devotees of Hamilton, the first U.S. Treasury secretary, got what they wanted: a politically driven money-making machine and an army of tax collectors — all to grow the central government.

One hundred years on, Americans (and what remains of the sovereign states) are firmly under the thumb of a Leviathan that claims to work for the “common good.”

Sen. Tom Coburn, R-Okla., summed up the sad situation this week, saying, “In both the executive branch and Congress, Americans witnessed an unwinding of the country’s founding principles. The rule of law gave way to the rule of rulers.”

If 2013 didn’t turn out so “good” for the commoners, the Sage of Monticello leaves two words: “Told you.”

Two more seniors are victims of black-on-white violence
Next Post
Father hacks teen son to death, fearing he is possessed