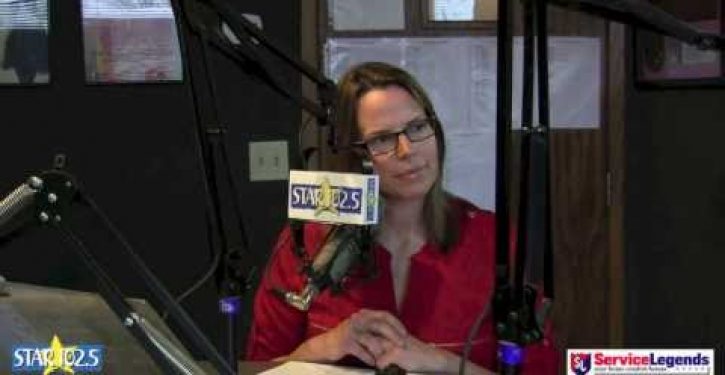 This year David Schmitz received an unexpected Christmas wish. It came from his wife, Brenda, which in and of itself is not that curious. What made the gesture unexpected is that Brenda Schmitz died over two years of ovarian cancer.

Before her death, Brenda Schmitz gave a letter she had written to a friend, explaining that it was to remain unread until her husband had found a new love in his life (which happened this year).

Once that condition was met, the letter was to be delivered to radio station KSTZ, which sponsors a Christmas Wish program each holiday season. During the event, the show’s host reads the most touching “wish letter” on air. Then the station consults with local businesses in an effort to make the wish come true.

This year, the decision of which letter to read was a no-brainer. According to the Des Moines Register, station officials notified David Schmitz last week that they were granting a Christmas Wish for him and asked to come down to the studio Thursday to receive it. But until host Colleen Kelly began reading the letter aloud, he had no idea who it was from. As Kelly read, he could almost hear his wife’s voice:

I have a wish for David and the boys and the woman and her family if she has kids also. I want them to know I love them very much and they always feel safe in a world of pain.

There were three wishes in all. The first was for something that would pamper David’s new partner (whose name is Jane). “She deserves it,” Brenda Schmitz wrote. “Being a step-mother to all those boys, and especially giving little Max a mother’s love that only she can give. Make her smile and know her efforts are truly appreciated from me.”

The second wish was for her family:

A magical trip. Somewhere where they all can enjoy their company and companionship as a family and create those memories that will be with them forever.

Her third and final wish was for the cancer nurses and doctors in her unit at Mercy Medical Center:

A night out full of drinks, food and fun for all they do every day for the cancer patients they encounter.

“It’s not surprising,” David Schmitz said after the broadcast, explaining that “the last year and a half she’s shown so many signs that she’s there.”

In accordance with Brenda Schmitz’s wishes, the family of eight will fly to Disney World, with flights and accommodations paid for. Mediacom is providing all the family members with park hopper passes for four days. While they are there, Jane will be pampered with a massage.

As for the hospital staff, who remained in her thoughts, they will receive three coordinated food drops, provided by In the Bag Corporate Catering.

Previous Post
Stand up and applaud sodomy on demand, or else
Next Post
Obama’s sham Obamacare ‘signup’