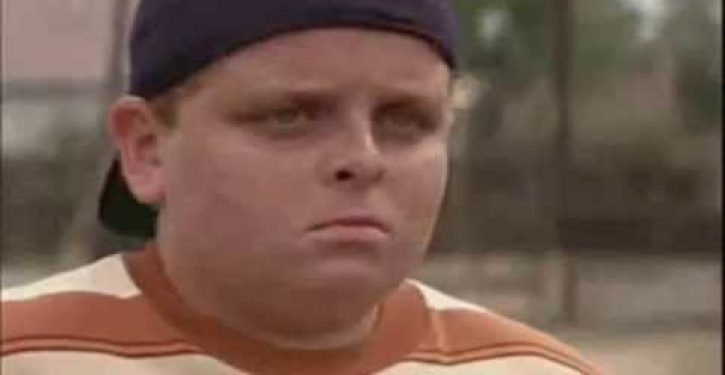 Political Correctness has a face…

No name, but a face… and footie pajamas. And a big ol’ mug of steaming hot chocolate. And possibly suffering from the worst case of Low T in the long and storied history of both simultaneous and sequential hermaphrodites.

With the emphasis on “boy,” The Washington Times hammers the tousle-haired nerdlinger poster boy for Doc Obama’s health care scam.

And by health care, I mean anyone with at least a severe case of the Mondays being mercifully drowned in a vat of Michelle’s favorite brand of hair relaxer or pummeled to death by pillow cases full of Rosie O’Donnell’s No!No! kits.

Can there really be stones thrown at the architects of ObamaCare’s PR campaign?

Ever since the end of the draft, the death of John Wayne, and my retirement from the United States Marine Corps, the state of American masculinity has been circling the drain.

The election of Barack Obama in 2008 signaled the death knell of anything even remotely resembling a functioning set of testes in the cultural landscape of Western civilization.

Besides golden boy quarterbacks nowadays being off limits from a crushing blow if any of those protected species slides feet first,  the first real sign of the psychological castration of Yankee Doodle Dudedom crossed all sports boundaries when the hated designated hitter rule came into being back in ’73.

As anyone who’s ever seen “Sand Lot” knows, any given ballplayer must actually lay hands on a ball, bat and glove. Anything less is just… well, un-American.

Speaking Strictly as an Alpha Male…

As terrible as anyone being killed or wounded in action is, once we hit the 21st century it became not only routine for women to be on military casualty lists, it became acceptable.

The hard-core reality why members of the fairer sex were being blown into small bits had nothing to do with equal rights, women in the Combat Arms fields, or a sudden infusion of testosterone or upper body strength for Suzy, Sally or Sha’Nique.

Suzy, Sally and Sha’Nique are administrative clerks, supply clerks and truck drivers, and with IEDs being the biggest killer of our troops in both Iraq and Afghanistan, is it any wonder why so many women were and are being blown up?

So why are so many gals serving as administrative clerks, supply clerks, and truck drivers in the Service?

Quite simple: Most American men are beta males.

Rachel Maddow jokes aside, most guys in this country have no problem whatsoever with tearfully waving goodbye at the pier while the wifey sails off to some far off CZ.

It’s sad but true, but in the years to come when one of the grandkids is sitting on gramps’s knee, that wide-eyed tyke will look up to and ask “Grampa, what did you do in the war?”

Pathetically, the only answer that could truthfully be given is “I changed your mommy’s sh*tty diapers.”

Previous Post
Horror story: Mom learns her 15-year-old son is dead when she reads about it on Facebook
Next Post
Prof. Dan Kahan disputes Wastebook portrayal of ‘Tea Party’ study