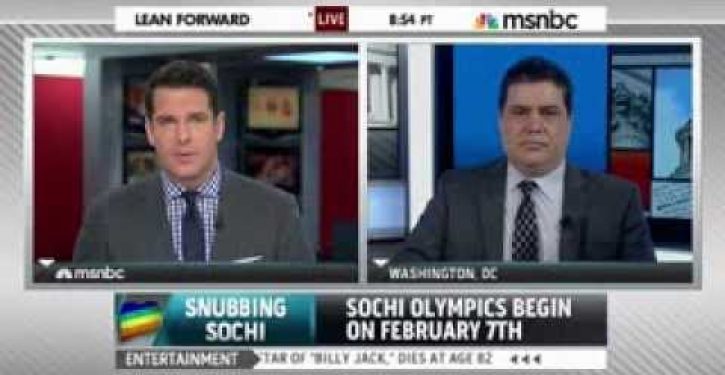 If the shoe fits, one might say. (And if you’ve ever seen his nibs throw a ball, you know full well that the shoe fits.)

The observation that Obama is the first gay president, made over the weekend by MSNBC anchor Thomas Roberts, is hardly novel, having been the cover story in Newsweek in May of 2012. The recognition of Obama’s homosexual bona fides followed his wholly non-politically expedient internal struggle with the question of whether gay marriage should be legalized. Obama came out (as it were) in favor same-sex unions and has been an advocate ever since.

So what prompted Roberts’s acknowledgment? It was, Noah Rothman of Mediaite writes, Obama’s support for “the rights of gays and lesbians abroad who face repression in their home countries who are less tolerant of alternative lifestyles.”

Given the many areas in which the U.S. has encoutnred [sic] friction with Russia, a country that has cracked down on the rights of same-sex individuals recently, Roberts asked a human rights advocate on Monday whether the president has any credibility in Moscow on the issue of human rights.

‘It’s Russia’s support for Syria, relationship in Iran, the current crisis in Ukraine, and also the protection of asylum granted to NSA leaker Edward Snowden,’ Roberts said of the areas creating tension between the U.S. and Russia.

‘How do you think the president can balance the delicate foreign policy issues but take a decisive stand on human rights, because so many people consider President Obama to be the first gay president?’ Roberts asked.

Roberts didn’t address the question of whether Obama — who was born to a white mother — is the first black president. Then again, he didn’t have to. Everyone knows that that title belongs to Bill Clinton.