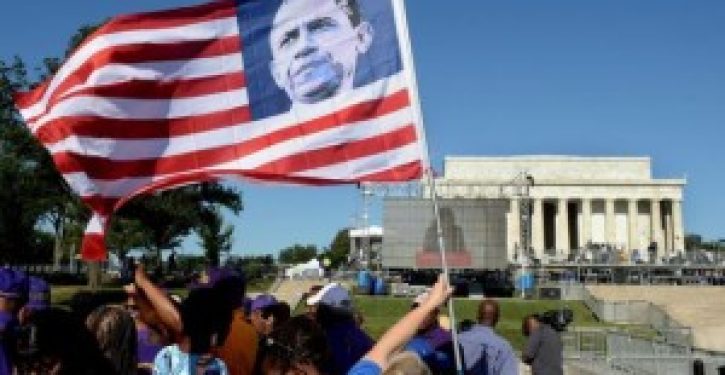 Ben Shapiro of KRLA in Los Angeles as well as the Editor-At-Large for Breitbart News penned further examples of what he’s tagged the Obama Worship Syndrome, as reported by the Fairborn Daily Herald (of Ohio) on Dec. 13, 2013.

On the heels of many in the media having been accused of long abandoning objective journalism in favor of willingly becoming the literal Ministry of Propaganda for the current Administration, Shapiro highlights:

Despite the fawning antics of the majority of the Fourth Estate, what isn’t getting ink spilled is how the Cult of Obama has grown among Joe and Jane Lunchpail.

Or in the case of Obama, Joe and Jane Foodstamp.

What was first looked upon as a somewhat humorous novelty item back in 2008, the Obama Votive Candles have since become oh-so-passé, yet from that figurative bad seed has sprung the Mighty (Sacred) Oak of ObaWorship.

No Need to Dust Off Your Old Sociology Books…

One surefire sign that a mere following has mutated into a full blown cult would be if the leader is placed in higher stead than one’s nation or even that of The Almighty.

When those who would otherwise be looked upon as normal folk start to replace not only their national patriotism but also their religious faith with instead the deification of the cult leader, in the words of former astronaut Jack Swigert, “Houston, we have a problem.”

Also appealing to the weak-minded, barely educated and socially unsophisticated, another no doubter would be current members promoting their Dear Leader on mass media platforms that cater to those who are easily attracted to the shaking of car keys as well as squirrels running across the yard.

Falling into those categories would be fan faves of mouth-breathers and free cell phone users everywhere such as:

Previous Post
Why were the Kincade brothers free to kill?
Next Post
China: Ignoring UNCLOS, ordering a U.S. Navy cruiser to stop