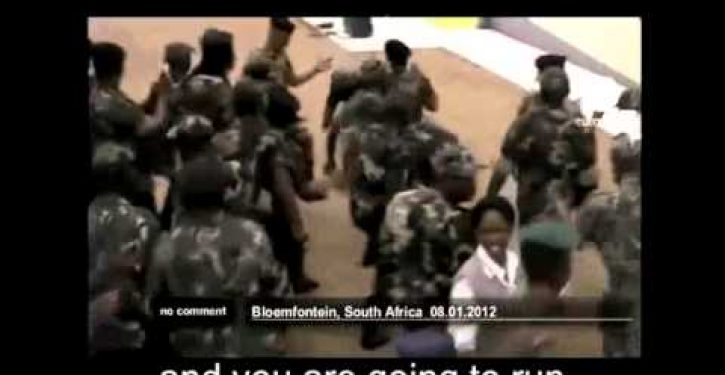 What the heck is going on in South Africa? South African President Jacob Zuma was booed by his own people at Nelson Mandela’s memorial and his translator was fake. The same translator, by the way, also did his weird mime when Zuma infamously sung “Shoot the Boer.”

The story of South Africa has been on my mind ever since I wrote about Zimbabwe’s horrific new legislation at Liberty Unyielding. It is well known that Zimbabwe seized farms from white people in 2000, which has resulted in poverty and hyper-inflation. Now, Zimbabwe is taking it a step further by seizing businesses belonging to white people and “foreigners,” mostly Nigerian and Chinese. The government is hand-picking “indigenous” people (cronies) as the new business owners. I could not sum up how awful this policy is better than Bhekuzulu Khumalo.

Those who do not comply will face prison. It is reminiscent of what is happening in Venezuela, under the genuinely creepy Socialist President Nicolás Maduro, as discussed at Liberty Unyielding.

But this is about South Africa.

It is evidently taboo to discuss the plight of the white farmers in South Africa.  And those who dare to speak out, are mocked and deemed racist by the media in South Africa and elsewhere. It is quite easy to find those articles.

White farmers are subject to horrific abuse at a much higher rate than others, and many are even killed by those who seek to take their land. It is a whispered campaign and statistics are hard to find. A report from the Solidarity Research Institute laments, “police statistics on farm murders must be released…”

In the wake of Nelson Mandela’s passing, some fear the violence will escalate.

John Simpson of the BBC wrote a rare article discussing the matter. He reports,

“Virtually every week the press here report the murders of white farmers, though you will not hear much about it in the media outside South Africa. In South Africa you are twice as likely to be murdered if you are a white farmer than if you are a police officer – and the police here have a particularly dangerous life. The killings of farmers are often particularly brutal.”

An article from Adriana Stuijt of the Digital Journal from back in 2009 explains who the white people are in South Africa:

“South Africa has about 3-million Afrikaners, descendants of Voortrekker Boers who first arrived there as indentured farmers to produce fresh crops for the Dutch East India Company’s ships to the Spice Islands — who stopped at the Cape of Good Hope to replenish their fresh food and water on these long voyages during the 17th century.”

She writes that the killings are

“a too-common story in South Africa’s rural areas, where mostly white Afrikaner farmers feel they are being targeted in gratuitously violent attacks on their remote farms and smallholdings. They accuse police and government of failing to make these crimes a priority. And as the horrifying murders continue, they are growing increasingly angry.”

In October, people from around the world participated in a rally, Red October, to bring attention to the “white genocide,” organised by Afrikaans singer Sunette Bridges and touted by the famous singer, Steve Hofmeyr. It did not get nearly enough media attention, and most of the attention it did get portrayed the protesters the same way the mainstream media in America portrays the Tea Party.

The group, AfriForum, has been helpful in supporting the white farmers in South Africa. Sunshine is the best disinfectant. It is time for people to take this problem seriously.