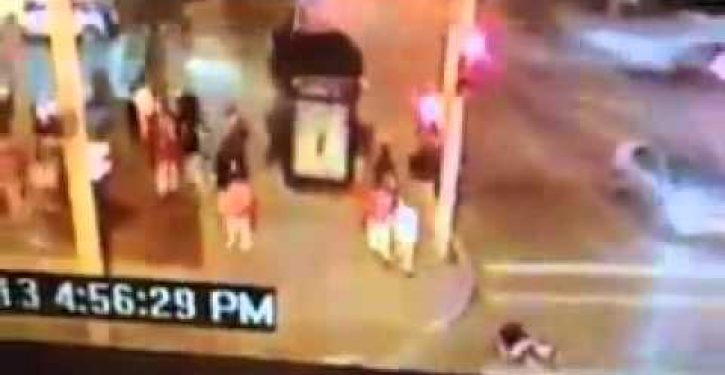 One of the unwritten rules of the “game” of knockout is capturing your own cowardly attack on an unsuspecting victim using a cellphone camera. This enables the attacker to post a “trophy video” online.

Unbeknownst to a group of geniuses in Milwaukee, theirs was not the only camera recording the event.

The Wisconsin Free has obtained exclusive video from a security camera of yet another victim of the so-called ‘Knockout Game,’ also known as ‘Point ‘em Out, Knock ‘em Out.’ The latest incident occurred near the Milwaukee Collegiate Academy at 4030 North 29th St. in Milwaukee.

In the video an unknown male is seen entering a sidewalk from a nearby parking lot on Dec. 2 at around 5p.m. What looks to be a group of males is seen following him in an almost stalker like fashion. As the victim approaches the corner, one man breaks away from the group, runs up to the victim, punches him from behind and runs off. The blow is so hard that the victim tumbles forward and collapses into the street.

After the victim falls to the ground, two more men from the group can be seen running up to him as he lies in the street. Due to poor video quality, it isn’t clear what the men are doing, but after a few seconds a school bus pulls up and they run back to the group. The victim is then able to stand up and can be seen quickly walking across the street, away from his attackers.

The attack happened in front of bystanders, though none of them are seen stepping in to help.

The victim appears to be white male, while the attacker and others in the group appear to be African-American – a repeat of previous attacks in Milwaukee. [Emphasis added]

There have been at least 2 other instances of white males being knocked to the ground by groups of African-American males in Milwaukee. One incident occurred on Oakland and Locust on Milwaukee’s Upper East Side and the other in the Sherman park area.