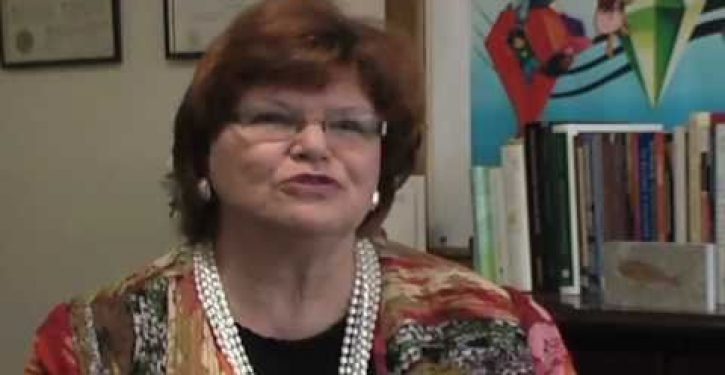 Instead of reflecting on what was seemingly a knee-jerk reaction to cancel the football season in the wake of racist graffiti aimed at one of the players that is looking more and more like a hoax, Lunenburg Public Schools Superintendent Loxi Jo Calmes defended her decision in a lengthy, defensive statement posted yesterday, eagerly “reminding” people that there is still racism being investigated at the school.

Interestingly, an anti-Catholic graffiti incident a mere 50 miles away has received no attention in the media. More on that in a bit.

The Superintendent’s statement read in part,

“A great deal of media attention has been focused upon the cancellation of the final two football games of the season.   I never looked at the cancellation as a punishment although it is certainly viewed that way by many.  In the end the safety of students and attendees at the game was deemed to be of paramount importance.  At no time did I or any employee of the schools indict or implicate any of our players.  In fact, my statements were that the graffiti investigation could NOT be limited to the team.   A statement by the way that drew the ire of those making the allegations.    I anticipate that we will be concluding our internal investigations before the holiday break.   I remind everyone that an investigation into racial harassment is on-going.   A separate investigation concluded that Lunenburg players did in both the varsity and junior varsity games direct racial slurs toward Worcester South players.  Referees and our own team members confirmed that fact.  That is why the apology was issued by the Athletic Director to the players of Worcester South. ” [added emphasis]

Interestingly, Loxi Jo Calmes did not mention a report by a local Fox Affiliate at the time. Buried in that article was the following:

“The referee questioned the Lunenburg player [accused of making the racial slur], and believed that he did not make the remark.” [added emphasis]

The town went bonkers, as reported at Liberty Unyielding, after a “13-year-old Massachusetts football player awoke to find racist graffiti spray-painted on his house.”  That, along with “allegations that players from Lunenburg High School made derogatory racial comments to players from Worcester South,” resulted in the Superintendent’s decision to shut down the football season.

But the insanity did not end there. The school, the local police, the district attorney and the FBI were all called to the small town to investigate the rampant and eeevil racism that had evidently taken hold of the town’s youth.

And there was a candlelight vigil for the victim posted on the town’s Facebook page that read in part:

“Attend if you can to show that Lunenburg is a town that will speak out for tolerance, mutual respect and diversity and will stand against hate! The LPD and FBI are now involved in finding out who committed this atrocious crime and brought such harm to our residents and community.”

One of the responses to the post said in part,

“…Certainly back in our day Coach Dick Mulligan would have handled his team properly! Cancel the remaining games- they don’t deserve to play and when the police track down the person(s) responsible they should be arrested & punished!”

The racist graffiti incident in the small town was reported at ESPN, ABC News, Fox News, the Boston Herald, Fox Sports, Breitbart, The Daily Kos, the Telegram, the Huffington Post, the New York Daily News, among many other local sources.

As an important aside on an unrelated case, about 50 miles away from Lunenburg High, Masslive.com revealed yesterday that three teens were in custody “in connection with 13 incidents in October and November where homes, churches and cars were either vandalized or set on fire.”

The article reads in part,

“Symbols, slurs, sexually explicit images and, in the case of United Church of Ware, an expletive directed at God and the words “Catholic burning,” were spray-painted…” [added emphasis]

This author can find no other mention in any other source of the anti-Catholic slur. Is the FBI involved in that case? Will this anti-Catholic incident be investigated as a “hate crime?” Not according to the one article on the issue that says the three teens,

“face multiple counts of arson of a dwelling, destroying or defacing a memorial to the dead, defacing property and attempt to burn a building…”

No hate crime charges? Did the church shut down until the perpetrators were caught? Were the parishioners targeted as possible suspects?

Justice must be blind to be just.

Back to the story at hand.

Andrea Brazier, the mother of Isaac Phillips, the former player on Lunenburg High School’s freshman team, is being investigated for the racist graffiti in what is looking more and more like yet another hate crime hoax.

Officials claim she “made false statements and then asked them [the FBI] to stop the investigation.” Oh yes, and they found spray paint (and ammunition was also found, as breathlessly reported everywhere, but not sure why that is relevant) in the family home after the investigation exonerated the football players and focused on the victim’s family.

Interestingly, on the same day the football players were exonerated, the Boston Herald said that the FBI “concluded the graffiti did not meet the threshold for a federal hate crime.” Specifically, the article stated:

“On Monday, Lunenburg police released a statement clearing the Lunenburg High School football team’s members of any involvement in the graffiti incident. The same day, the FBI said they had concluded the graffiti did not meet the threshold for a federal hate crime.”

What exactly IS the “threshold for a federal hate crime”? Perhaps intent to commit bodily harm, as stated by the Shepard Act?  Perhaps the namesake of that law should change, as it turns out that the horrific Matthew Shepard case was not what it seemed.

It seems that young Isaac Phillips was a victim of his own mother.

Watch Superintendent Loxi Jo Calmes tell everyone what bullying is and how it needs to be “eradicated.”

It seems to me that the football team has been bullied. They deserve an apology.