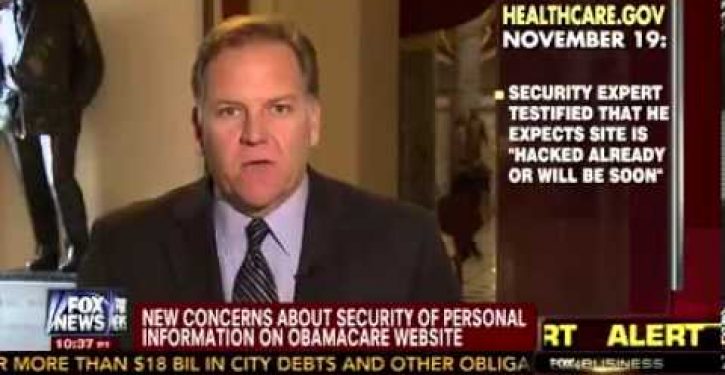 Day 65 of Obamacare’s Healthcare.gov roll-out (also known as Day 4 of the President Obama-guaranteed new and improved re-launch) produces lesson no. 65 on how not to build and launch a website.

The latest “glitch,” around which Democrats have wrapped there’s-nothing-to-see-here-police tape, that “all” president’s lie about, and about which Republicans are required to lead cheers lest they be accused of “rooting for failure,” concerns the security of your personal health and other information you are mandated to impart to government bureaucrats so they can get you some insurance:

It doesn’t matter how healthy you are, everyone signing up for ObamaCare is in a high-risk pool when it comes to online security. While the White House boasts that HealthCare.gov is more functional than ever, internet experts beg to differ. For those applicants lucky enough to make it past the exchange’s home page (and that still isn’t many), “proceed at your own risk” seems to be the motto from most insiders – including HHS’s own.

The website’s data protections are so lax that administration officials worry about “high exposures” of personal information. Everything from medical histories to payment details could be leaked into the public domain…

That doesn’t seem to faze the President, who is sticking by his December 23 deadline for individual enrollment – knowing full well that Americans will have to compromise their personal safety to comply. Rep. Mike Rogers (R-Mich.) blasted the administration’s flippant attitude toward security and fumed that HealthCare.gov “does not even meet the minimal standards of the private sector.” On NBC’s “Meet the Press,” Rogers reminded people that their personal information isn’t just on the exchange portal, but “all of the [federal government data] sites that the [HealthCare.gov] hub accesses would expose Americans’ personal information in a way that is breathtakingly bad.”

Of course, if one’s identity or other personal information were stolen from a non-governmental website, you could hire a lawyer and sue for damages resulting from the host’s negligence. But HealthCare.gov is blessed with sovereign immunity, discussed here by DeVine Law less than one month ago, when these fears were first made manifest.

Just had a brainstorm. Why not let Americans take the risk of getting their health insurance and health care in a free market with those evil insurance companies, doctors, hospitals and Big Pharma and see how that turns out? Oh yeah, it was already tried from around 1776 through at least the early 1960s and we don’t recall there having been an absence of immigrants yearning to get into America nor citizens trying to escape to get health care elsewhere. Hmmm…