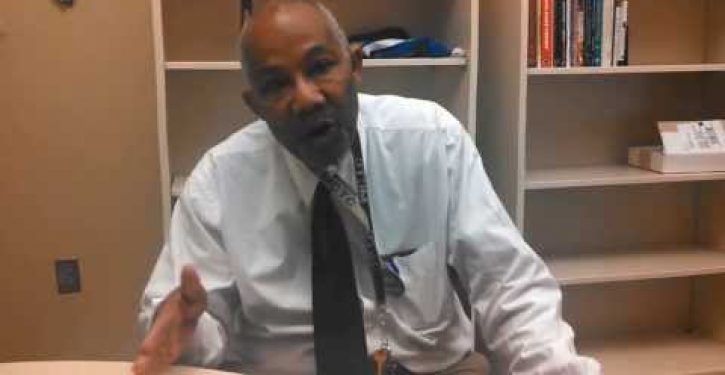 In case you missed it, the big story of the weekend (apart from Obamacare) was a tweet posted by the Republican National Committee to commemorate the 58th anniversary of Rosa Parks’s bold stand against government-sanctioned racial discrimination. What generated heat was the reference in the message to Parks’s “role in ending racism.” It was the verb end that was the flash point.

Typical of the visceral outrage was a blog post by the Washington Post’s Jonathan Capehart, which announced that “the Republican Party is dead to African Americans.” The National Black Republican Association will probably be surprised to hear this, but nevertheless, the fact remains: Racism is alive and well.

And on vivid display at Minneapolis Community and Technical College (MCTC), which has issued a formal reprimand to a member of its faculty over charges that she racially harassed students. According to Campus Reform, Lois Bollman, Vice President of Academic Affairs, wrote to Prof. Shannon Gibney:

Your actions in [targeting] select students based on their race and gender caused them embarrassment and created a hostile learning environment. For that reason, I have determined that a reprimand is warranted.

A reaction from Capehart and his fellow liberal black journalists is probably not forthcoming, primarily because the narrative doesn’t fit their agenda. It is the teacher — the aggressor — in this instance who is black and the students who are white (and male).

Three of Gibney’s students filed a complaint asserting that a discussion on structural racism in her Introduction to Mass Communication class made them feel uncomfortable. As Gibney tells it, she was talking about structural racism when one white male student got upset and asked, “Why do we have to talk about this in every class?” Another asked, “It’s like people are trying to say that white men are always the villains, the bad guys. Why do we have to say this?”

Gibney defended herself in an interview with City College Air, an online student publication. In a video peppered with sympathetic text screens, she says:

I tried to explain, of course, in a reasonable manner — as reasonable as I could, given the fact that I was being interrupted and put on the spot in the middle of class — that this is unfortunately the context of 21st century America.

The incident, Campus Reform notes, was not the first of its kind. Gibney was also reprimanded in 2009 after allegedly singling out white male students on the school newspaper staff for not doing enough to eliminate bias from the organization.

Gibney and six other professors are filing a class action lawsuit against MCTC, alleging that it is a discriminatory workplace.

The school has issued a statement, which reads:

At Minneapolis Community and Technical College we believe it is essential for our students to understand issues of race, class and power, and we encourage the faculty to actively engage students in respectful discussions about these topics and create an atmosphere in which students may ask questions as an important part of the classroom experience. That’s how we learn. As a diverse college we want to ensure that students, faculty and staff from all cultures and backgrounds feel welcomed and have an appropriate learning environment. We train our employees to ensure that these critical conversations around issues of diversity are constructive and lead to understanding.