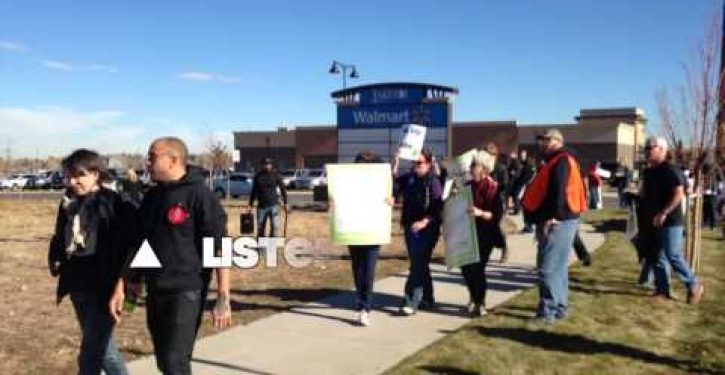 Black Friday was humiliating. It seems that every year, shoppers looking for a bargain get more and more aggressive and Walmart was ground zero for this horrific behavior. Videos of people fighting in the stores were popping up on Twitter under the hashtag #WalmartFights.

But this article is not about the fights. It is about the unions, who evidently paid activists to protest the popular retail chain.

“National Labor Relations Board lawyers OKed a major union’s practice of paying people to protest against Walmart in a legal memorandum earlier this month. The federal labor law enforcement agency said the practice of paying workers $50 apiece to join protests “did not constitute unlawful … coercion of employees.”

Josh Eidelson of  Salon bizarrely said the claim was a “lie” while confirming that it was true.

But Eidelson does not think that counts, because the attorneys for the NLRB.

“concluded that the offer ‘did not restrain or coerce employees,’ but rather represented a ‘non excessive strike benefit designed to reimburse employees for some of their lost wages if they struck, and was non discriminatory.'”

What a stretch! The Salon article is titled:

“Debunking Wal-Mart’s latest lie: “Unions paid $50 to anyone who protested”

How was it a lie? Just because the “general counsel” felt that employees were not “coerced” by the $50 gift card, does not mean that protesters were not given $50 to stand there with their ridiculous prefab signs. I believe their big point is that the gift cards were only given to union workers. Talk about twisting the facts.

If the unions had a reasonable cause, they would not have to pay people to leave their jobs on Walmart’s busiest day of the year. What a moronic thing for the unions to do. They want to hurt their employer and then ask for more money? This is why Hostess was forced out of business. The unions bite the hand that feeds them.

Walmart should fire anyone who took part in these protests.

The lawyers may not have thought that being paid was a factor in the Walmart employees’ decision to protest, but consider this video, posted at Weasel Zippers.

One of the protesters clearly says,

“I would not tolerate this protest if I were not being paid.”

The commentary is a bit irritating, as the video speaks for itself.

WH will announce Sunday it has met deadline, but don’t believe it
Next Post
Common Core-approved book for 3rd graders presents messianic view of Obama … literally