It has happened before. The Onion or some other satirical website trading on the Onion’s success puts words in the mouth of former Alaska governor and 2008 Vice Presidential hopeful Sarah Palin. And the civil-tongued inhabitants at the left side of the ideological spectrum go ballistic.

You’d think that would be enough to tip anyone off, but not the intellectual denizens of the hard left. The story, titled “Sarah Palin: ‘Thanksgiving is for Real Americans Not Indians’,” is obviously meant to be humorous. Here is an excerpt:

Appearing on a local morning talk show in Washington, Palin put her sparkling intellect on display once again.

The segment started off well enough. It was really just a puff piece about the meaning of Thanksgiving in people’s lives. Things derailed quickly however, when the interviewer asked Palin about the controversy surrounding the holiday.

Palin sat dumbfounded unaware of any controversy. The host went on to fill her in on the fact that many Native American tribes do not celebrate the holiday. In fact, it is a day of mourning for them. And those that do celebrate the day do so because it is a reminder that they survived mass murder, forced relocation, the theft of their land and many other injustices.

Palin’s response was astounding, ‘Thanksgiving is for real Americans not Indians. We founded this Christian nation. Why if it wasn’t for the God-fearing pilgrims, the natives would still be running around in loin cloths shooting at things with their arrows.’

So how did the real stupid pets in the national react? Twitchy has a round-up of some of the more priceless Tweets, several of which are reproduced below. (Warning: profanity):

The problem with all of this is not the gullibility of those who fall for these pranks. It has happened to people on the right as well. It is the vicious nature of the attacks and dim-wittedness exhibited in some of the comments.

It is also the readiness and willingness of those on the liberal left to accept Palin as a feckless boob because of attacks on her by an elite media whose mission in 2008 was to smear her. Those who worried that electing John McCain would put an idiot within a heartbeat of the presidency are unfazed at the endless inanities that issue from the mouth of the clown who currently holds that title. 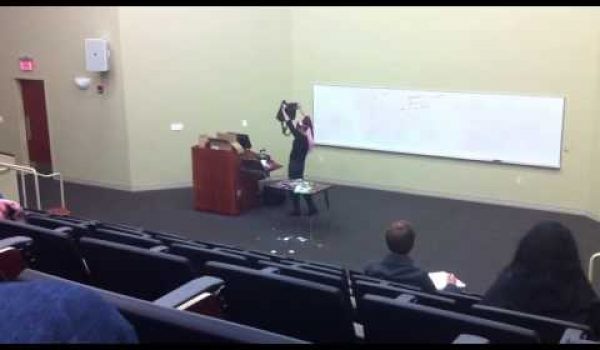 Free condoms handed out as door prize at Obamacare event
Next Post
Spice up your Thanksgiving with a gun control debate!