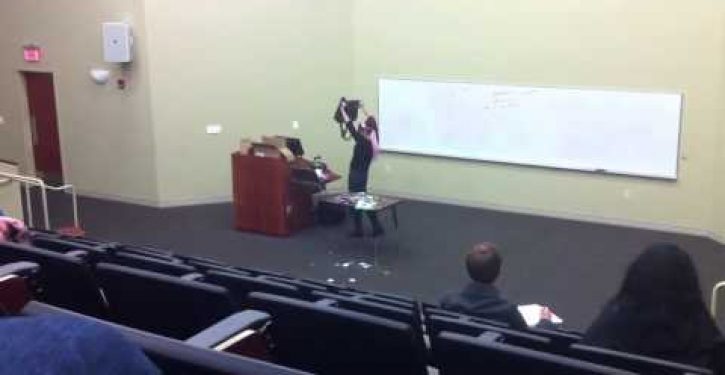 If anything, this story out of Arkansas suggests that birth control isn’t used nearly enough. The crowd reaction alone to the sight of male prophylactics spilling from a bag described below lends support to this argument.

Daniel Halper of the Weekly Standard writes that attendees of a government-sponsored Obamacare event at the University of Central Arkansas last weekend received free condoms as a reward for … er, attending.

The event was hosted by a group called the Living Affected Corporation, which has evidently received a grant from the federal government to educate the public about Obamacare. There is a lot re-education going on these days with the help of Big Brother.

Halper offers a video, which has been reproduced below. A transcript follows.

The event organizer spilled out a bag of condoms — as a couple whoops and hollers could be heard from the small crowd.

Then she says, ‘Ok, if anyone wants a paper application,’ but she interrupts herself to pick up condoms that had fallen on the floor. ‘I have those as well.’

‘So when you’re leaving, you can stop by my table and I’ll give you whatever — condoms — that box has a bunch in it. Anyway … Our corporation, LA Corp … And I’m waiting on my dental dams and female condom order that still hasn’t come in. If you ever need condoms, let me know because we have thousands — boxes of magnums, we get magnums a lot. So here is the prize table.’

Good thing they didn’t give out free beer.