Warning that a U.S.-British-Dutch financial cartel threatens to topple a teetering European Union, a German official is urging Washington to reinstate the Glass-Steagall Act and rein in big banks, including the Federal Reserve.

Dorothea Schleifenbaum, an elected representative of Germany’s ruling Christian Democratic Union, was on Capitol Hill last week to push for re-enactment of Glass-Steagall, which was repealed 14 years ago.

“Germany is expecting a crash,” said Schleifenbaum, who related how she was shocked to learn how German commercial banks had begun buying bonds from Greece, Italy and Spain – three of the sick sisters of Europe.

“These bonds are not secure. They are toxic,” Schleifenbaum told this reporter in an interview.

Contending that some $1.5 trillion in Fed “excess reserves” are spread across the continent, Schleifenbaum asserted that the money “is going to terrorists,” drug runners and foreign adventures in Syria, Afghanistan and Egypt, adding:

This investment bank money does not reach the people. It’s making war with U.S. dollars. It’s creating divisions and instability in society.

A group of mayors and elected officials from Germany and France raised similar concerns last August. In the “Arzviller Declaration,” the officials, including 350 French mayors, stated:

We are scandalized by the new banking laws in Europe, which allow unbridled speculation, while imposing ever more criminal austerity policies.

It was not simply rhetoric, when a British official told a U.S. economist in 2010 that his government would consider the re-establishment of Glass-Steagall a ‘hostile act.’

We’re not as sovereign as we should be. I’m convinced that the U.S. must make the first move.

The real interests of the American people are different than Wall Street’s. If they were aware, they would support Glass-Steagall. It would be good for Germany and the rest of the world.

Speaking of national sovereignty, Spannaus concluded that “Glass-Steagall would reduce Wall Street to the bankrupt husk that it is, and restore the sovereignty of the U.S. government over its economy and finances.”

Glass-Steagall – which was enacted in 1933 and repealed in 1999, prior to the Wall Street meltdown that triggered a series of multibillion-dollar bank bailouts – is gaining support, despite stiff opposition from investment bankers.

A similar House measure – co-authored by Reps. Marcy Kaptur, D-Ohio, and Walter Jones, R-N.C. — has 78 sponsors, while more than a dozen state legislatures have bills calling for Glass-Steagall’s return. 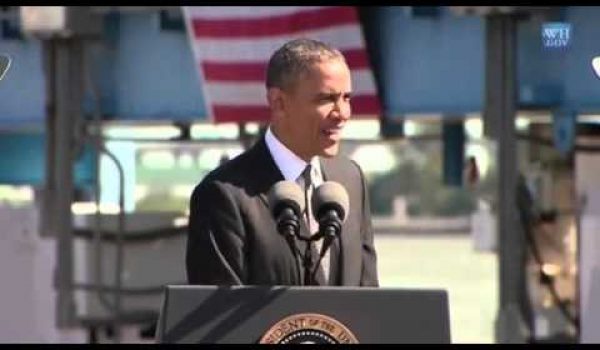 Dems, president can run but they can’t hide from Obamacare
Next Post
Kerry: ‘No daylight’ between Israel and U.S. on Iran deal