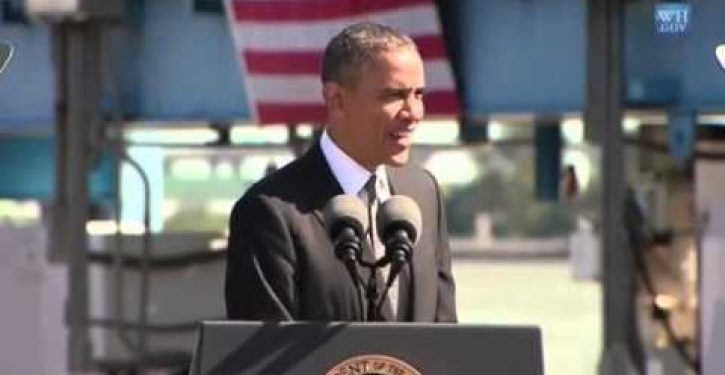 It’s not clear what the takeaway was supposed to be from an experiment by late-night talk show host Jimmy Kimmel, who sent cameras out onto the street to ask Americans which they prefer, Obamacare or Affordable Care Act. It may be that he was highlighting Americans’ understandable confusion over a law that, with its reams of regulations, creates a stack of papers three feet high. Or maybe Kimmel was out to show that we, the people, don’t pay as much attention to the goings-on in government as we should.

Whatever his motive, this much is clear. If Kimmel had asked the president or Dems in Congress which they prefer — Obamacare or the Affordable Care Act — the answer would have depended greatly on when the question was asked. The Washington Free Beacon has compiled a video of sound bites by the president and his Congressional enablers that show the shift away from the label Obamacare to the law’s more official (if ludicrous) name as its toxicity level rose throughout October (h/t Renee Nal).

One short clip (at 0:20) shows Obama, typically smug and overconfident, telling a crowd that his Republican “enemies” will continue to mock the law “until it’s workin’ really well, and then they’re gonna stop callin’ it Obamacare.” That the president is not holdin’ his breath waitin’ for that unlikely eventuality comes soon afterward in the video. But before he appears again (at 0:38), this time wearing a more sober expression and referring to the law as the Affordable Care Act, there are a stream of quick cuts from news reports, all referring to the “Obamacare fiasco.”

In other news, Associated Press reported this morning that GQ released its least influential list for 2013 and that the president’s name was on it. The report prompted Newsbusters’ Tim Graham to tweet, “What did Obama to do upset GQ? Model three-piece suits for Sears?”

I would submit that GQ missed the boat. The harm that Barack Obama inflicted on the American health care delivery system became so inescapable to so many in 2013 that a recent ABC News/Washington Post poll revealed that if voters were given a do-over on the 2012 presidential election, Mitt Romney would prevail over Obama by a margin of 49% to 45%. With the Nov. 30 deadline around the corner and the Healthcare.gov website nowhere near ready for primetime, Obama will continue to run away from the mess he created. But ultimately he won’t be able to hide.