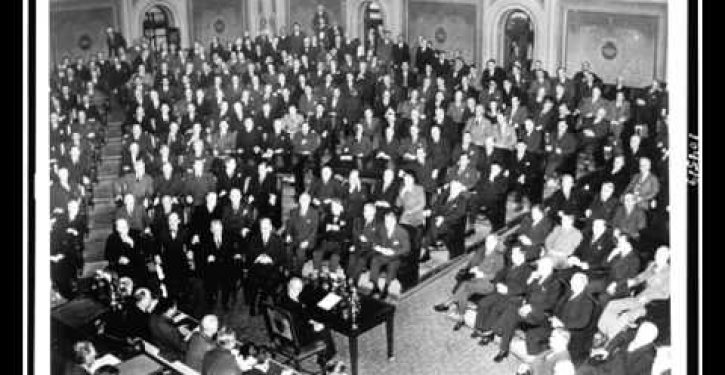 In 1936, shortly after his re-election, FDR had a strategy on how to deal with Supreme Court Judges who overturned aspects of his state-sovereignty-robbing New Deal legislation.

Franklin Delano Roosevelt introduced legislation that would put in one of his appointed justices for every judge already on the bench who was over the age of 70.

The plan was so unpopular that even FDR’s Vice President John Nance Garner,

“went back with him to Capitol Hill, stood in the well of the Senate and, as the plan was read aloud to the senators…held his nose and gestured thumbs down.”

If you get nothing else from this article, I urge you to listen to FDR’s Fireside chat.

FDR failed, but Senate Majority Leader Harry Reid, by invoking the Nuclear Option last week, has succeeded in taking away the voice of the minority in the Senate, the voices that the people elected to represent them, paving the way for presidential appointees to get a swift confirmation, no matter how radical they are.

And Republican leadership is silent. In 2005, the Democrats were loud. Very loud.

“Back in 2005, Democrats told Frist they would shut down all Senate operations if he exercised the nuclear option.”

Today, the Democrats want you to think that there is an “unprecedented” level of “obstructionism.” But there is no more “obstruction” now than there was during the Bush years, or during any other time in history. With the mainstream media’s full support, the Democrats are effectively pulling the wool over everyone’s eyes.

What is different this time around is that the minority party is complicit in their silence.

This is not the point of this particular post, but the author did address it, inspired by a delicious rant by Mark Levin, at Tavern Keepers, which said in part,

“Mark Levin discussed their do-nothing tactic on his Friday (11/22) radio show. Levin said that because of the nuclear option, the courts will now be “flooded with radicals with lifetime appointments.” He said that President Obama is “ruling by executive fiat and bureaucratic regulations.” He said that “The GOP must take steps to blunt this lawlessness.”

But sadly, Levin is not optimistic. Citing a must-read article at National Review by Jonathan Strong, Levin notes that the GOP Leadership is so afraid to take pressure away from Democrats on the Obamacare fiasco, that they are not shouting loud enough over the nuclear option.”

Read how Mark Levin responded to the GOP’s concern. It will make you cheer.

Back in 2005, then- GOP Senate Majority Leader Bill Frist tried to rationalize his consideration of the “nuclear option,” which ultimately never even came to a vote, by saying this:

“It is time for 100 senators to decide the issue of fair up-or-down votes for judicial nominees after over two years of unprecedented obstructionism.”

“…the United States Senate has wasted an unprecedented amount of time on procedural hurdles and partisan obstruction.”

“I am also aware that the Founding Fathers established the filibuster as a means of protecting the minority from the tyranny of the majority — and that protection, with some changes, has been in place for over 200 years.”

“But today’s pattern of obstruction, it just isn’t normal. It’s not what our founders envisioned.”

“…We have confirmed 95% of your nominees. And if you can’t get 60 votes for a nominee, perhaps you should think about who you are sending to us to be confirmed.”

“The vast majority, well in excess of 95 percent to 98 percent of his nominations, have been approved in a pretty expeditious basis.”

In 2005, the Center for American Progress wrote,

“As early as this week, a “nuclear option” could be invoked to remove the 200-year-old tradition of the Senate filibuster, the tool that empowers 41 or more senators to prevent a narrow majority from abusing its power. The filibuster is one of the only ways to encourage genuine bipartisan cooperation and compromise on important issues that come before the Senate.”

In 2013, the Center for American Progress wrote,

“Today’s vote to reform the Senate rules is a victory for the American people and an important step towards getting Washington back to work. Today’s targeted reforms come after years of unprecedented partisan obstruction by the same Republicans who shut down the government and repeatedly held our economy hostage.”

As the Republicans in the U.S. Senate consider invoking the “nuclear option” of prohibiting filibusters on judicial candidates, a bit of Senate history might be in order. It shows that the arguments being marshaled against the filibuster are sheer sophistry….From the first days of the Senate, the principle of unlimited debate was the hallmark that set it apart from the House.

“As Democrats watched Senate Republicans use filibuster powers to thwart more and more of President Barack Obama’s agenda and nominees, they wondered how much worse it could get. They finally reached a breaking point this past week when party leaders concluded that what they called GOP obstruction had made a mockery of American democracy.”

“Frist, whom some in Washington think has presidential ambitions, has placed his credibility at stake by arguing so strongly in favor of giving every judicial nominee an up-or-down vote.”

“Republicans are accusing Democrats of a “power grab” that’s bad for democracy, while Democrats are saying that they had no choice but to sideline the GOP lawmakers trying to gum up nominations out of spite.”

Not spite. Checks and balances.

If you are interested in reading more about FDR’s court-packing plan, Mark Levin wrote about it in his book, “Men in Black: How the Supreme Court Is Destroying America.”

Listen to FDR’s Fireside chat on his court-packing plan.