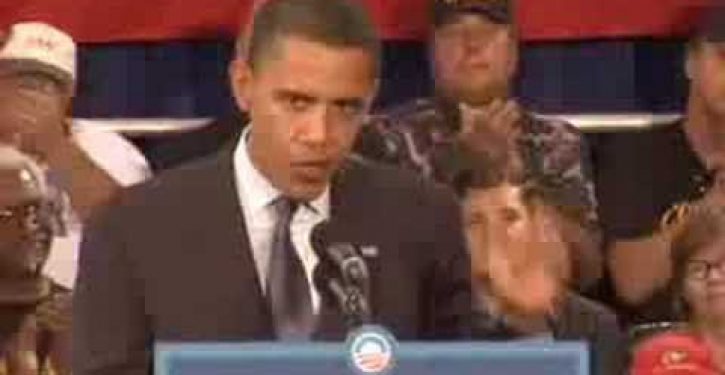 President Obama was quoted in Business Insider yesterday as saying, “If you got a majority of folks who believe in something, then it should pass.”

Like Obamacare? Anyway, the ramifications of this statement will likely fly right over the heads of the Low Information Voters, who nod along and cheer even when Obama discusses his creepy “civilian national security force” or when he rewrites the Bill of Rights to include health insurance as a “right” granted by the government.

The White House was so proud of Obama’s statement, which was made in reference to the Democrat leadership’s breathless abandonment of a centuries-old Senate rule (referred to as the filibuster rule, or the nuclear option) to ensure support of presidential nominees under the majority, that they blogged about it, created a meme and posted it on Twitter.

Everything you need to know about why today’s #filibuster rule change is a really big deal: http://t.co/Sl4lKRMxpe, pic.twitter.com/69aLdZ8kpL

Senator Obama would have disagreed with the President. As a constitutional scholar, Obama understood the “tyranny of the majority,” something that the founding fathers wrote about extensively.

Consider James Madison’s 1788 work, The Federalist No. 51, “The Structure of the Government Must Furnish the Proper Checks and Balances Between the Different Departments” or Alexis de Tocqueville‘s work on the “tyranny of the majority.”

Randall Hoven posted a letter by President Obama that proves he understands all too well the “tyranny of the majority,” as then-Senator, he wrote in part,

“I recognize that the filibuster can be used for unfortunate purposes. However, I am also aware that the Founding Fathers established the filibuster as a means of protecting the minority from the tyranny of the majority — and that protection, with some changes, has been in place for over 200 years.”

As reported yesterday at Liberty Unyielding, the hypocrisy surrounding the so-called nuclear option, i.e., the abandonment of this Senate rule, is staggering.

Perhaps Americans owe President Obama a debt of gratitude. Without his overt trampling of the Constitution, many, including this author, would be blissfully oblivious to the incremental erosion of civil rights in America, rights that have been chipped away by both parties for a century.

For those that have woken up, it is vital to be the Jack Jouett of this age.