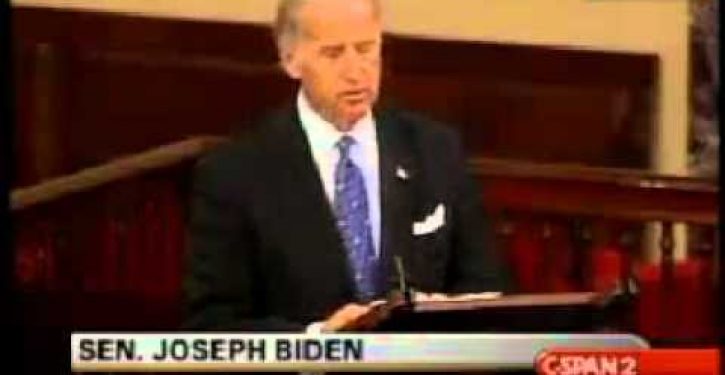 Let’s not be naïve here. Politicians do what politicians do, not what they say. Did Harry Reid not swear in 2008 that as long as he was Senate Leader, he would never turn to the nuclear option? Of course he did. He even went on to elaborate, saying that doing so would be a “black chapter in the history of the Senate.”

Today, we witnessed a black chapter in the history of the Senate. Reid, as the Washington Examiner and other sources note, triggered the nuclear option in order to block Republicans from forcing a 60-vote threshold and filibustering any nominations other than those for the Supreme Court.

The radical change to Senate rules comes after GOP senators blocked a trio of Obama nominees to the D.C. Circuit Court of Appeals. The fight over filibuster rules has been brewing for months though as Republicans delayed a slew of administration nominees. Reid’s change would allow nominees to be confirmed with 51 votes, a bare Senate majority.

“Can anyone say the Senate is working now? I don’t think so,” said Reid, trying to justify the action.

Reid had cover from fellow hypocrites in the Democratic Party, including the president who said in a tweet:

Contrast the sentiment with Obama’s view in 2005, when he said, “The Founding Fathers established filibuster as means of protecting minority from the tyranny of the majority.”

At least Vice President Joe Biden is a man of principle, right? Judge for yourself. Here he is, back when he was a Senator.

Senate Minority Leader Mitch McConnell, R-Ky., was critical of the move, and warned that it would come back to bite Democrats when they lost control of the chamber. “You will no doubt come to regret this, and you may regret it a lot sooner than you think,” he admonished. He of course was speaking as another politician.